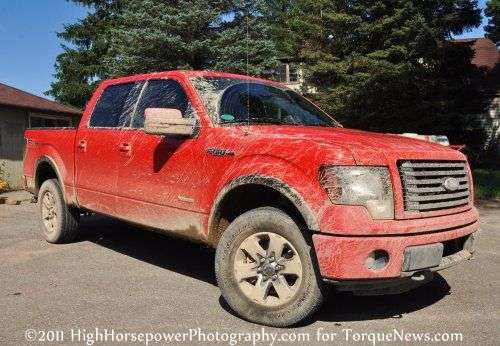 While speaking with a group of reporters in Dearborn, Ford Motor Company sales analyst George Pipas stated that the truck segment as a whole is the strongest it has been this year – currently holding about 13% of the overall American new car market.
Advertisement

Ford, Ram, GMC and Chevrolet have all been having strong years in terms of pickup truck sales and with the trucks currently accounting for 13% of new vehicles sold in the US this month; this is the strongest month in relation to the rest of the industry for pickups since December 2010. The pickup segment has been accounting for roughly 9% this year so for these and while gas prices have been steadily on the rise throughout the summer, truck sales have stayed strong.

Sales of trucks, especially four wheel drive trucks, are strongest in and around the cold weather season where consumers are finding a need for a vehicle that is more capable in the snow. However, the rise of the sport utility vehicle has given many 4WD buyers an alternative but for those who need a vehicle that can tow, haul and battle the elements pickups have remained the best choice. Realizing that real truck buyers are going to buy trucks no matter how costly fuel gets, the American automakers have made great strides in the area of fuel economy so to those who truly need a truck, buying a new pickup has become even more attractive as the Ram, F150, Sierra and Silverado are more powerful and more fuel efficient than ever.

Models like the 2011 Ford F150 EcoBoost (shown on the right in the gallery), which offers class leading power and fuel efficiency, has allowed the consumer to buy a pickup that will not kill you at the pump but at the same time, the buyer doesn’t have to compromise any capabilities. Because of the EcoBoost, Ford’s V6 engines are currently outselling the V8 models with the turbocharged 3.5L V6 accounting for over 40% of total F150 sales. The EcoBoost F150 can do pretty much anything that any of the other half ton pickups can do but when you don’t have the bed filled or an 11,000lb trailer hooked up, it can also reach fuel economy levels of 22mpg – a claim that no other truck this capable can make.

Also, Chrysler’s 5.7L Hemi V8 offers better horsepower than the EcoBoost V6 but the Hemi powered Rams in the proper configuration is also able to get into the 20 mile per gallon range. These two trucks show the incredible gains made by trucks in offering fuel economy and real truck abilities – helping the truck market to continue to power ahead as fuel prices rise.