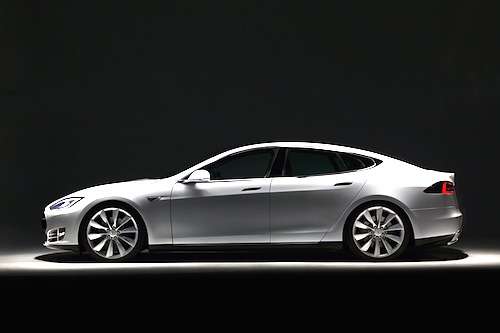 In an increasingly more and more sophisticated on-board infotainment system that dizzies the mind with stunning visuals, the all-electric Model S is the game changer.
Advertisement

On-board information systems have become a de facto reality in most cars, making them indispensable. A user’s positive experience is as much the driving, as the aesthetics and the practicality of the car, but information system are becoming the success key.

Model S Redefines Information Visuals. You have to hand it to Tesla Motors with the impossible task of another electric car with conventional electric batteries that pushes the limits. If the Roadster was a nail in the coffin of naysayers, the Model S is a spike. So what can we expect from the Model S?

Technical Marvel. If you have a Tesla shop near you, go and see it for yourself. Chances are there will be a cutaway of a Model S where you will see the amount of clever engineering that went into it. With a clear cutaway, you will see how the engineers managed to shove the electric motor, differential and converter all in the rear axle tunnel. Reducing space and tightly packaging leaves plenty of room for its occupants, as we’ve been made aware of. See the video below.

On-Board Information System. One of the other star is its on-board infotainment system. As soon as you see it, you know you are in for a real treat. The 17-inch display shows serious screen real estate. But there is more here then eye-candy with the whole system powered by the NVIDIA GeForce GPU Tegra processor used in current smartphones and tablets. The Tegra Visual Computing Module, VCM powers the vehicle's 17-inch touchscreen “infotainment” and navigation system, as well as its all-digital instrument cluster. It is claimed to be the largest screen ever built into a passenger car and it shows with it prominent display of visuals.

Technically Speaking. Tesla didn’t design the system as an after thought, it has with everything you would come to expect from such a vehicle. 3G connectivity, streaming radio, web browsing and navigation at your fingertips are what the vehicle allows you to do. The multi core ARM CPU has a dedicated audio, video and image processor, where one of the Tegra VCM powers the infotainment system with a customizable interface for music, phone, navigation, connected services and climate control. The other harnesses the all-digital instrument cluster, including the high-resolution 12.3-inch LCD display and advanced 3D graphics.

Some cars leave you feeling “blah”, others make you look forward to them. Now with Bank of America and Wells Fargo to give you that needed loan, you too can think about owning this electric wonder car. With the Tesla Model S, not only does Tesla Motors leapfrog the competition, it also shows how a stunning infotainment should look like.