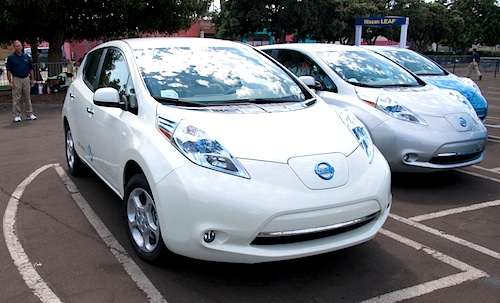 Nissan Tackles What Comes After Early Adopters For LEAF

Nissan beat everyone to market the first-modern all-electric car, EV. But after appealing to early adopters, the company shifts strategy.
Advertisement

What do you do after you captured early-adopters? You turn to the rest of the audience. The problem is that the rest will not pay the high price as easily and needs a certain amount of education to make sense of an electric car. Nissan is adapting its strategy with a global marketing campaign aimed at green-minded people and technically savvy folks.

Early-Adopters to The Mass Market. In one sense, early-adopters are easier to reach than the mass market. Give them a compelling enough product and they usually get it. But they might represent only a minuscule percentage of the population. Almost all technical products start this way, from Apple’s ubiquitous iPhone to the latest electric car, early adopters charge the way at a premium.

Adapting The Message. Lonely polar bears on a melting ice block to struggling dolphins in plastic debris somehow aren’t enough to convince everyone to stop burning petroleum. The compelling messages don’t work if your budget is tight and your considerations more mundane. So what is the next wave of electric car buyers? It’s the green and tech-minded consumers.

Nissan’s Green, Techy Message. Nissan is opting for an interesting route, that of convincing consumers aware of climate issues that they can play an active role in society. And for those technically inclined folks, how an electric car keeps you connected on the go.

By focusing on the Leaf and future electric cars’ speed, it will also show the convenience of charging options and that zero emissions are noble quests. The tech messaging will vary by highlighting the wonders of an always-connected life with an integrated on-board entertainment system.

According to Yasmin Al Jeboury, Nissan CRM manager for Marketing Week: “Such messaging has a much greater chance to reach a wider spectrum of both segments, and it’s clear that Nissan is getting the message... It’s not a niche model, it’s a family car and that’s what will make it successful. Electric cars have to do what normal cars do.”

This strategy is not only very revealing but shows Nissan understands the changing demographics of the newer generations. By appealing to what it calls the “green-minded” people, it effectively reaches out to the 30 to late 40s who have grown up in a deteriorating world. By showing the 20 something generation that with an electric car they can continue their always-connected life, Nissan effectively targets two important key market segments. It makes sense to appeal first to early-adopters, then to the early-mass market adopters, before the rest of the market catches on. Nissan is showing a solid grasp of generational issues of what matters to them by focusing on a weary green-minded target and a younger always-connected generation.

Paul Scott wrote on July 9, 2012 - 5:26pm Permalink
Nicolas, you got it right here in that Nissan is reaching out for customers instead of mining the depleted early adopter group. That turned out to be a much smaller group than I thought. I sell the LEAF for a downtown LA Nissan dealer and the crowds who were clamoring for their LEAF last year have turned into a trickle. It's now time to advertise! What's good is that those who have the car love it more than any car they've ever owned, so we get a fantastic word of mouth. The goal is to reach those who are skeptical and get them in the car for a test drive. That will work since driving the car almost always results in a positive conversion of a skeptic.
Nicolas Zart wrote on July 9, 2012 - 6:03pm Permalink
Thanks Paul, it makes sense. I wrote an article not too long ago how the 20 something generation is in no hurry to buy a car but with the advant of technology, always-on connection that coud just sway them. And as for many of my generation, no plug, no deal kind of thing. I met another happy Leaf owner who has loved his for over a year with his daily commute from Long Beach to Santa Monica back and forth without a hitch. He is on track with his projected savings. Can't beat that. Thanks for your comment, Nicolas
Don Bain wrote on July 10, 2012 - 12:43am Permalink
I was certainly impressed When I got a chance to drive one this year and I'm nowhere near the demographic target range. All you need to do is drive one, realize how many free charging stations there are and jump on the bandwagon.
Nicolas Zart wrote on July 10, 2012 - 9:57am Permalink
Hey, I hear you! I was an Alfa Romeo fan and other older performance Italians and never, ever thought the no-sound, no-smell, no-vibration would ever interest me until I sat at the wheels of an AC Propulsion eBox and of course a Tesla Roadster. Then I realized what it was like having power but still feeling zen. It's something you can't describe until you drive one. What I particularly liked about the Tesla was that its my hands and right foot. Nothing else was trying to grab my attention away from tracing the perfect curb and lines :) Oh the joy! I even felt odd returning to my souped up 1974 Alfa Romeo Spider, something I never thought I would ever feel.