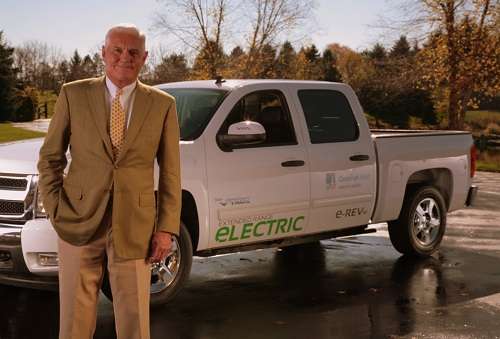 VIA Motors announced at the Las Vegas CES event it will convert conventional trucks, cargo vans and SUVs into plug-in hybrid, PHEV vehicles based on GMs.
Advertisement

The gist is GM needs to push its foray into the hybrid world by beefing up its offerings, especially if it wants to ride the momentum of pits Volt PHEV. In comes VIA Motors, much as Magna International did for the original Ford Focus electric prototype to answer the perceived need. Let’s hope this will yield the same success for GM.

Technically Speaking
. Using a GM 4.3 V6 engine coupled to VIA’s own VR300 electric motor backed by a 24kWh lithium ion battery pack, the platforms shows good numbers. The electric motor delivers 402 hp with 400 nM, or 300 ft-lbs torque. Using also their gas generator, a VR150 which produces 201 hp, enough to recharge the battery pack, this makes it a comprehensive platform. With 40 miles on electricity alone, the onboard generator kicks in the recharge the depleted pack and the internal combustion engine, ICE kicks in to drive the wheels.

The great news for fleet owners here is the capacity to use their trucks and SUVs on electricity most of the time, since their average daily range is around 60 miles. This would greatly improve the overall gas budget, as the PHEV can be plugged overnight to squeeze as much as possible.

How Much? Obviously with any new technology and with the aim to build only a few thousand in the first year, prices will go down if there is greater public demand. As of now, the vehicles are priced at $79,000. Fleet owners can knock off $20,000 from federal incentive rebates, which brings them down to a more affordable 50,000 bracket. Reservations start with a $1,000 deposit.

All in all, this is good news for GM who hasn’t developed its own hybrid technology as much as it could have done in its financial heydays. With most of the resources pulled into the research and development of the Volt PHEV, the GM hybrids haven’t matured as well as other car makers.

Adam Yamada-Hanff wrote on January 13, 2012 - 2:16pm Permalink
The real question... why isn't GM doing this?
Nicolas Zart wrote on January 17, 2012 - 2:12pm Permalink
GM has stretched itself a lot by undertaking to frog leap the pragmatic path to more advanced hybrids, finally plug-in hybrid, then pure electric drive. This happened back in 2009, when in crisis mode, poor public perception, bailouts, they had to strike a high note and decided to bring the Volt to the streets. They had limited resources and placed a huge bet on the plug-in hybrid. When they noticed things were not happening as smoothly as they had expected, they went into another frenzy with a ill-conceived campaign renaming their plug-in hybrid an "extended range electric vehicle", (half a dozen of this, six of that!) to keep the momentum going. The EREV sparked a lot of humor amongst us. This culminated with the "range anxiety" campaign to drive skittish potential clients towards the Volt. All of this backfired, as you would expect, especially judging with the average sales of the Volt. They couldn't spend more time and energy developing their hybrids, which was a Toyota shared platform. Both companies were having problems. It seems they took a clue from Ford who piggy backed on Magna's great job at electrifying the Focus, by letting other companies do the same for their trucks. They will gauge public interest this way at a fraction of the cost and eventually will partner with them, or buy them out, depending on their financial state. The problem with GM is never engineering. Their engineers are great. The problem is always in the same place, management and the decision process. There is still a disconnect, but it will change eventually.