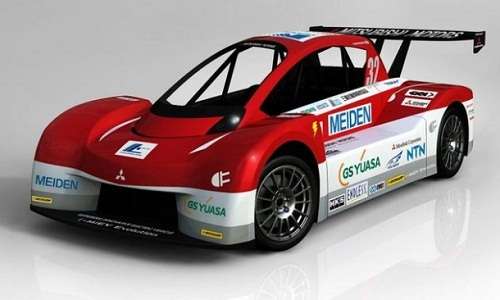 Not too bad for Mitsubishi’s first try at tackling the illustrious Pikes Peak, with a second electric vehicle place. This means good news for the future of electric cars from the company.
Advertisement

The specially made Evo that I witnessed at the Mitsubishi Owners Day MOD 2012 did very well considering its first outing at none other than the difficult Pikes Peak International Hill Climb. At 12.42 mile long, cars have to corner 156 curves uphill. Mitsubishi’s i MiEV Evo scored second under the Electric Vehicle class with a lap time of 10 minutes, 30.850 seconds. But the i MiEV Evo scored an impressive scratch win, it also placed 8th overall against 170 vehicles entered in this year's Pikes Peak event. Can you spell electric cars are here to stay?

Electric Cars Enter The Racing Scene. It’s funny to think that a few years ago, electric car naysayers would say electric motors couldn’t handle hills. If the Mitsubishi i MiEV Evo is to prove anything, it’s certainly that electric motors have no problem climbing hills and that they are now challenging gasoline cars.

Technically Speaking. Although technically it was designed specifically for the Pikes Peak race course challenge, the Evo was driven by Mitsubishi’s very own factory test driver and two-time Dakar Rally winner Hiroshi Masuoka. With its specifically designed carbon-fiber bodywork, streamlined for this race, it sits on top a tube-frame chassis. The i MiEV Evo uses an advanced version of Mitsubishi All-Wheel Control, AWC all-wheel drive, which makes use of three electric motors. What is impressing about this is this race prototype, the Mitsubishi i-MiEV Evolution uses many components from the road version 2012 Mitsubishi i-MiEV production car, amongst which are the electric motors, lithium-ion batteries and MCU.

The Other Production i MiEV. As we mentioned in our previous article, Mitsubishi also entered a regular production version at Pikes Peak. The production Mitsubishi i-MiEV was driven by professional SCORE International off-road racer Beccy Gordon. She finished 6th in the Electric Vehicle class with 15 minutes, 10.557 seconds. That’s roughly 5 more minutes than the purpose built prototype. The only things that differed were race related and safety features such as modified front and rear bumpers, and seat harnesses.

More than just a win for an electric car racing uphill at one of the most difficult race on this planet, the Mitsubishi i MiEV electric car, both in its prototype race and production versions show the company’s commitment to electric cars in general. What we can witness are two important events. First electric cars can be raced successfully and it is a question of time before they dominate gasoline-powered cars. This will make for an epic fight the next 3 years to see electric car racing improve and how their gasoline counterparts react. Second, that electric cars have come a long way from having problems negotiating hills to winning out right international hill climbs.

Congratulation Mitsubishi on your electric car race at Pikes Peak with the i MiEV Evo and production i MiEV.