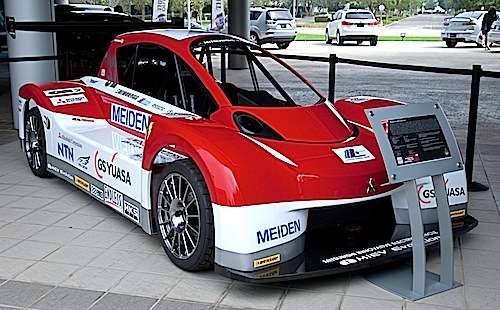 Mitsubishi has forged a serious reputation over the years with its sports cars, coupe and sedans. MOD2012 was a reminder of the loyal following the company has.
Advertisement

The strangest thing you wonder as an electric car writer when going to a car event is what will it be like and will there be electric cars, EVs. If MOD2012 is any indication of the company’s enthusiastic following, then the success was obvious. Cars lined up starting at 4:45 am just to have the perfect spot. Yes, Californian’s are hardcore when it comes to waking up early and cars.

From Small To Big. While Mitsubishi’s excellent urban all-electric i MiEV was there, the company does have other cars that are noteworthy. Its new Outlander and Lancer lines sport impressive performance and greener emission than cars from a few years ago. Mitsubishi has done a great deal to make sure you and the environment were heard by lowering its emission substantially. Essentially the company offers from the small electric i MiEV all the way up to the Outlander crossover, making sure anyone can find what they are looking for.

Soup Up My Ride. In a sea of souped up cars, it was hard to make out the ever-so subtle differences between one job from another. Mitsubishi had made available a dyno where faithful fans were able to test how much ponies they tweaked out of their modified production cars. Some cars were highly modified, while others had modest tweaks. A rough estimate of how many people showed up would put it at around 1,000 with varying styles and levels of performance.

Take The i MiEV For A Spin. Now if you ever want to have fun, go and see a car guy trying an electric car for the first time. An owner of a souped up Evo putting north of 300 HP test drove the i MiEV. His reaction was typical. He was amused, intrigued and couldn’t believe how much torque the car had. Asked if he could see himself in one, his answer was: “yes, one day.”

The Cherry On Top. The best part was the that actual i MiEV Evo was there, having been brought back from Colorado Springs after the fires devastated the Pikes Peak session in July. The Evo looks even more impressive up close. The wind tunnel work is impressive and this purpose-built electric car racer had many intrigued. With a constant stream of onlookers, the questions varied from how much power to the drivetrain configuration.

All in all, if you have ever wondered where does Mitsubishi stand in the world of automobile, a trip to MOD2012 will show you a wild following, fierce loyalty and some serious modding and tuning of Mitsubishis.