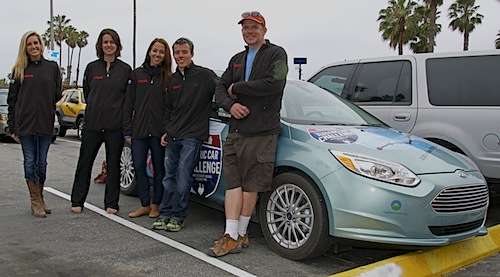 We've known that coast to cost driving with in an electric car is possible for some time now with high-end performance electric cars, such as the Tesla Roadster, but thanks to Men’s Health Magazine, it is now also possible with proved Ford Focus Electric.
Advertisement

It wasn’t the sunny day we normally associate with California’s Los Angeles beaches, but it was nonetheless an epic “race”. The cross-country team that started in New York City after the New York Auto Show ended its over 3,000 mile run in Santa Monica on Earth Day. I met up with most of the Men’s Health team and had an interesting talk with IndyCar and American Le Mans racer Martin Plowman.

How Does It Feel Driving Over 3,000 Miles In An EV? Come on, admit it the thought has crossed your mind, from how does it feel to how possible is it. It definitely wasn’t easy, but it seemed the team had fun. They encountered the expected and of course, the unexpected. With impromptu flash river slides, early arrivals with no one to open the charging stations, the team had to rely on its quick wit and good old luck. The one thing the team unanimously discovered is that they appreciated taking their time when stopping instead of the usual get there as soon as you can pace we inflict on ourselves.

From IndyCar & LMP To Urban EV. My first question for Martin Plowman was how does it feel going from a 475 hp LMP one weekend in Long Beach, California, see my Long Beach Grand Prix story, to driving a Ford Focus Electric with its 123 hp electric motor giving 181 lb-ft of torque? Surprisingly, there are similarities when driving both. If speed is of the essence in winning a race, intelligent management of resources, such as how much fuel or in this case electrons needs to be used is the utmost priority. You need to get there as quickly as you can by wasting as little as you can, not an easy task. Martin told me he used race tactics in order to squeeze as much miles as possible from the Focus Electric’s liquid cooled and heated 23 kwh LG Chem lithium-ion pack. Martin made use of as much coasting as was humanly possible, as well as exploiting downhill’s regenerative braking capacity. It’s a careful and tricky balance finding the ultimate feedback of enough regenerative braking power to recharge the battery pack, without slowing down the car too much.

Running Into Obstacles. Of course, what’s a road trip without the fun of the unknown, the unexpected and the last minute obstacles? While driving at night, the team was coming down a hill when all the sudden they notice the road at the bottom looked different. Thankfully, they slowed down enough to completely stop before seeing a three foot deep flash river that over took and crossed the road before them. At one point, the team was ahead of schedule and pulled in at 3 AM at their recharge point only to find no one was there. These are the fun things I expect the original Cannonball racers must have had to deal with, way back then.

Where Do You Plug In? To that the answer is simple, plenty of places. As any electric car, EV owner will tell you, a little preparation will get you everywhere. One of the obvious place to plug in is at RV camping grounds. RV require 240V plugs, something an EV can make abundant use of. KOA proved to be a fun resource and at one point, while the team recharged their Focus Electric, they let off steam by bouncing on a gigantic air pillow, somewhere in the middle of Arkansas. Seriously, doesn’t that make you want to do this cross-country run?

The Cross-Country EV Challenge. The EV cross-country challenge is invaluable beyond words. Not only is it the obvious good publicity but it is also a proof of concept that EVs have made the incredible New York cast to coast run. The Ford Focus Electric was also a good choice for many reasons, despite being target mostly for urban use. It not only currently holds the best electric mileage of all EVs, but it sports a 6.6 kW on-board charger, cutting down a regular 6 hour charge to 4, on an average.

Asked if the team would do this again next year, the answer was yes if more EVs join the race. In the meantime, this concludes the very first New York Los Angeles EV race, breaking a world speed record, thanks to the Men’s Health Magazine initiative with two Ford Focus Electric proving once again that EVs are here to stay.