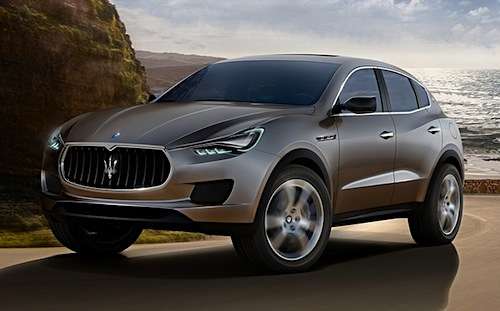 Maserati Enters the Exclusive SUV Market With a Bang

Kubang, that is... The first Maserati SUV aptly named Kubang, Italian for SUV has been highly anticipated since rumors surfaced, in Ferrari’s and Alfa Romeo’s case, as far back as 5 years ago of an Italian SUV.
Advertisement

While Ferrari wizened up by deciding not to build an SUV, Alfa Romeo also agreed so far not to engage in this pursuit, Maserati felt it would be better suited for a very upscale performance SUV it will call the Kubang. And why not, since so far Porsche is the only game in town and has proven a performance SUV is not an oxymoron after all. So the question remains, what can you expect from a Maserati SUV?

The gist is Maserati is synonymous with luxury, comfort, style and performance. It’s stitched leather interior is a testimony to that certain Italian flair for aesthetics. However, Maserati spokesman Jeffrey Ehoodin declined the SUV Kubang prototype shown at the North American Auto Show at Detroit would be like the final version. Nonetheless, the Kubang will be the perfect alternative to those SUV lovers in dire need of performance with that Italian unbeatable style, topped by the inimitable Maserati luxury touches we’ve come to expect from the company. The Kubang aims to please that specific margin of clients in every of those aspects. As a side note, Maserati has differentiated itself from Ferrari in terms of clientele since the 1960s. A Maserati buyer tends to be a little more discreet driver who needs a fast, comfortable performance car for getaway weekends.

Technically Speaking. The Maserati Kubang will borrow the Jeep Grand Cherokee and Dodge Durango platform and use its current V8, as it has done on its Quattroporte and Grand Sport line up. What we can expect is a reworked chassis by the Maserati team and the tried-and-true Ferrari derived Maserati V8. While still at the prototype stage, little else is known about the true performance. A good idea would be to take the Quatroporte and add a few seconds, few pounds to the overall numbers.

The Luxury Performance Market. This is where Maserati Kubang will enter the very exclusive market of luxury performance SUV, so far Porsche’s domain, albeit at a much lesser price. And at $118,000, it will be exclusive considering the closest competition is Porsches' Cayenne at around $50,000. Nonetheless, it comes in at the same price range as other Maseratis and should help the company continue its foray into U.S. soil. Yet, the real trick for the company will be to see if buyers are interested in a Jeep and Dodge platform reviewed by the famous Italian exotic car maker. Somehow, I feel the Kubang has a space in the automotive world, after all, history has shown time after time that there is a seat for every behind in this market.

And if an SUV is more than you can muster for a Maserati, there are still other cars Maserati has to offer to delight you if comfort cruising with performance and that “I’m-not-a-Ferrari-driver” attitude is what you like.