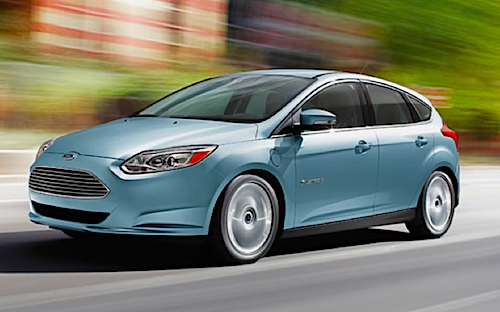 Let’s face it, electric car interest goes up and down following the trend of petroleum price and now is as good a time to get that electric Ford Focus with the up to $10,000 incentives given.
Advertisement

Kiss the gas pump blues goodbye, especially if you live in California with a sweetened deal with as much as $10,000 off, the capacity to cruise on carpool lanes and enjoy their new Ford Focus Electric, which was recently voted as America’s most fuel efficient five seater electric car. With gas price already hovering at $4.50 a gallon and projected to hit $5-per-gallon soon, saving $10,000 on a carpool lane electric car might just be what weary consumers and the industry needs.

CARB Eases EV Transition. The California Environmental Protection Agency’s Air Resources Board, CARB approved the state’s 2012 Ford Focus Electric owners to drive in the carpool lanes on those highly congested highways. And to sweeten the deal further, they will also be able to take off an extra $2,500 in tax credits on top of the federal tax $7,500 incentive.

According to the Texas Transportation Institute’s annual Urban Mobility Report, Los Angeles and the San Francisco-Oakland metropolitan area rank as the 3rd and 7th worst congestion spots in the U.S. In Los Angeles alone, this means a total of 38 million gallons of fuel are wasted a year, which costs the average commuter an extra $1,464 a year.

America’s Most Fuel Efficient EV
. All of this comes in a t great time when the Ford Focus Electric was recognized as America’s most fuel-efficient five-seater electric car, EV. With 110-MPGe in city fuel economy rating and 99 MPGe on the highway, this EV is coming onto the market with a splash in the pond. If you were on the fence until now with the Ford Focus Electric and live in California, wait no more. You can now apply for the State’s $2,500 tax rebate whether you purchase or lease it for 36 months or longer and then add the extra $7,500 in federal tax credit to your yearly budget.

According to Ford’s John Viera, Global Director, Sustainability and Vehicle Environmental Matters there isn’t a better time to save money at the pump by going gas-free with its Focus Electric.

Quickly Charging The Ford Focus Electric. Savings are huge advantages with the Focus Electric. With the average cost of a full charge at night ranging between $1and $2, this gives you around 76 miles, depending on your driving style, and environment and road condition. To get a better idea of what this adds up to, think about a 38 mpg car, where the cost to drive that same distance at $5 a gallon would equal to $10. $2 or $10 over the years, the choice is yours. A quick and dirty calculation gives you about $9,700 in fuel costs savings over five years compared to the average new vehicle with average national gas prices. This is good news since the last 10 months has seen a sharp rise in the number of domestic charging stations, up from 750 to 5,507, according to the U.S. Department of Energy.

But the Ford Focus Electric also offers a few things the competition doesn’t yet. It has more passenger room, a faster charging system and slightly more range than say a Nissan Leaf. Yes Nissan, the Leaf now has competition. Careful driving, feather foots and hypermilers will even squeeze 100 miles on a single charge.

Ford Ramps Up EV Production. In order to meet the ever increasing EV demand, Ford is also tripling its production capacity in order to reach over 100,000 through 2013. The company is also applying to have CARB qualify its growing portfolio of electric and plug-in hybrid, PHEV vehicles for the California Clean Vehicle Rebate Program. The 2013 Fusion Energi plug-in hybrid and the 2013 C-MAX Energi plug-in hybrid will be petitioned. Both vehicles get an impressive overall range in both modes, electric and gas of more than 500 miles.

The Ford Focus Electric and plug-in hybrid family comes in at the right time when petroleum is getting harder to drill and extract, rising prices to ever heights. With the price of a barrel pointing to $150, it will be soon enough when it reaches the 200 and above threshold, sending consumers in a frenzy. In many ways, the Ford Focus Electric and Energi family come in at right time with a nice $7,500 rebate and up to $10,000 in California.