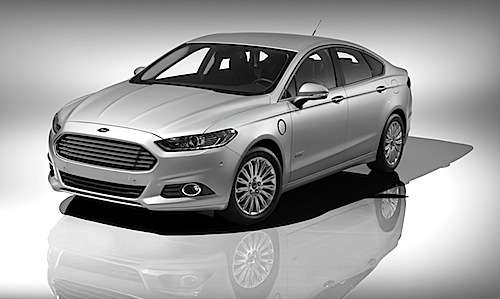 Ford grabs another award making the Fusion Energi the most connected vehicles currently available. So what does it mean for you exactly?
Advertisement

If you still think a car is still four wheels that get you from point A to B, you are partially right. Today’s cars are closer to rolling computers, connected in more ways then ever. Ford wins again another award for the Fusion Energi plug-in hybrid at the 2013 International CES as the midsize Connected World Connected Car of the Year 2013 by Connected World Magazine.

Connectivity. It’s all about connectivity these days, especially for electric vehicles, EV and plug-in hybrids, PHEV. The new Fusion offers an impressive array of connectivity and driver assist features, which includes the standard SYNC with MyFord Touch and compatibility with the MyFord Mobile smartphone app.

In fact, according to Paul Mascarenas, chief technical officer and vice president, Ford Research and Innovation: “SYNC has helped us evolve as an automaker, to think and act more like a technology company, with a new level of openness and access that has forever changed how we look at our business and respond to our customers. Ultimately, SYNC embodies one of the many things Ford is all about: going further to transform innovative ideas into products that are affordable, attainable and valuable for millions of people.”

SYNC Is Growing. The ever growing SYNC connectivity system allows drivers to connect their phones, tablets and digital media players via Bluetooth or USB for hands-free operations, which include media playback using simple voice commands. SYNC Services offers features powered by the mobile carrier a driver has. All the manufacturer’s plug-in vehicles, the Fusion & C-MAX Energi, and Focus Electric come with the MyFord Mobile app that allows drivers to stay connected using their personal cell phones or computer with Internet access. These services give the current and projected state of charge, which include the estimated range and amount of charge time necessary for additional travel distances. This makes it easy to figure how much energy you will need to cover a certain distance.

MyFord Mobile programs the plug-in vehicle’s charging according to utility input, thus allowing the car to start charging immediately or when electricity prices are lowest. See yesterday’s article; Ford opening SYNC AppLink, increasing smart phone usability in cars
http://www.torquenews.com/1075/ford-opening-sync-applink-increasing-smart-phone-usability-cars
By allowing a driver to locate charging stations and get there, as well as knowing if the vehicle can reach it from its current location with the current charge level, it makes it easier to plan for a journey with multiple stops. In case of trouble, it will warn you if the vehicle isn’t charging or if there is a power outage, plug removal or other problem. The MyFord Mobile app is available for Apple and Android devices.

Always Available Information For The Driver. In the end, the greatest benefit is constant information available to the driver. The Fusion Energi has a suite of advanced driver assistance technologies designed to help drivers be more aware of their surroundings using an array of radar, ultrasonic, optical and motion sensors. Such systems include Lane-Keeping System, Driver Alert System, Blind Spot Information System, Active Park Assist, Cross-Traffic Alert, adaptive cruise control, collision warning, as well as a rear view camera.

What About Driver Control? While this automation can be a good thing, what happens if the driver wants to regain complete control if the vehicle? It’s tricky to find the balance between being helpful and completely taking over the driving experience. Ford has designed these systems to help mitigate the risks. While my generation of drivers might look at these systems with a weary eye, many of today’s younger drivers will have grown up using such technologies. And after all, haven’t we all seen a driver or two needing some help to stay on the road due to lack of attention?

Today’s cars are nothing like yesterday’s. Modern vehicles are rolling computer platform connected to the internet using cellphones or connected devices. In many ways, this does take away from the adventurous feeling we once had, leaping into the unknown, unsure of what we would find. On the flip side, such connectivity means you never get stuck out there. In the meantime, congratulation Ford on getting the Fusion named the most “Connected Car” by Connect World magazine.