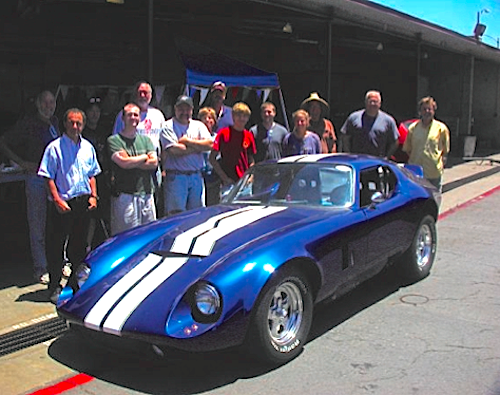 Drag racing has been around for a long time but the incursion of electric motors is challenging conventional notions that it must be loud, with toxic fumes and a lot of rumble.
Advertisement

Michael Kadie had a dream and Michael built it. At the tender age of 5, Michael watched his car enthusiast uncle race and the bug was transmitted. With no known anti-virus and growing up watching Magnum P.I.’s 308 Ferrari, his love of cars only grew stronger. He wanted to build his dream car and his curiosity brought him to hydrocarbon fuel cells. However, building a car in the 1980s would have cost around $250,000, closer to 500,000 in today’s money. There had to be another choice. Michael wanted an American muscle car, preferably a classic and something with heritage. He finally decided on one of the most beautiful design, a Brock Coupe, which later became known as the Shelby Daytona Coupe. Thus he founded his enduring SSI Racing company.

Technically Speaking. By using a Factory 5 Type 65 coupe, Michael didn’t follow the tired old approach of slapping on a gas guzzling V8. Instead, he chose an unconventional approach, that of using originally a TransWarp 11-inch electric motor conveniently mounted within the transmission tunnel. Michael recalls searching for enough batteries and eventually used around 100 Dewalt 36 volt tool batteries bought on ebay. Today the EV sports a Netgain motor with a Zilla motor controller, and custom BMS, Airride suspension, with what Michael tenderly refers to as a lot of love, blood, sweat, and tears. Eventually, he was able to afford close to 1,000 A123 Systems lithium ion cells from as its power source. Michael has raced his electric vehicle, EV dragster in the NEDRA series competition and is proud to announce it already holds three world records. It has beaten a classic, supercharged GTO by 3/100 in a drag race. This dragster has a few commodities which makes it a perfect street car using an airbag suspension, amongst other things.

The Numbers. His Daytona racer, now called 2SSIC sports impressive numbers with a standard configuration offering over 1000 ft. lb of torque off the motor. The 0 to 60 is achieved in less than 4 seconds, and all of this comes with a 100 mile range and a maximum speed over 140 mph. Using a high quality stereo with internal and external speakers, a remote door opener, and touch screen gauges and controls, this is one EV dragster that will find little to no competition on the road. Those numbers allowed Michael to set six world records and still going after more.

SSI-Racing Build For Sale. SSI-Racing already has a lot of credential under its belt. With no less than 10 electrified vehicles, SSI-Racing offers a few choices that should cater to green adrenaline aficionado. Michael is proud to announce after years of tinkering and racing that his beloved 2SSIC EV and other projects are now available for sale. All project have a build time of 6 months and Michael told me: “We can convert nearly any vehicle to electric as our work has demonstrated. Give us a call, we’ll go over your requirements, design a custom package to your specifications, and you can join the green revolution without compromise. We’ll take your favorite car and make it a clean green electric dream vehicle.”

Your 2SSIC Daytona EV can sprint the 0 to 60 from 3.4 to 2.9 seconds, have a 100 mile range average and also be available from 60 all the way up to 300 miles. Horsepower also comes in different flavor from powerful to very powerful with t300 hp at wheels and ranging from an optional 250 hp to 800. The average build will give you 1000 ft-lb of torque available, but you can tweak all of this to deliver from 500 to 1800 ft-lb at your convenience. The EVs will give a 140 mph top speed and you will also have a choice of drag racing, road racing, or comfort suspensions settings. All of them use an auto-leveling RideTech air suspension that comes in standard. The wonderful thing about personalized built cars is that the choice of colors and interior is yours. With a touch screen or classic gauge package choice, you also get a fully isolated charger. All EVs start at $120,000, depending on your specifications.

A Green Future For SSI-Racing. While still under wrap, the future holds a green outlook for SSI-Racing. Michael has been in talks with different investors and sponsors and is now working on a project that will be able to handle 300 to 900 hp. Michael is riding a green wave he got on before it was fashionable. With the experience he has gathered and world records under his belt, he is now speaking with sponsors and investors to further the future of SSI-Racing. SSI-Racing has proven a long time ago that green electric vehicles are not only sexy, they are sleek, fast and powerful.

Tsingshan's Threat to Tesla: EV Maker Is In Battery Crosshairs
Tesla-Funded Research Reveals One of The Biggest Mysteries of EV Battery
END_OF_DOCUMENT_TOKEN_TO_BE_REPLACED