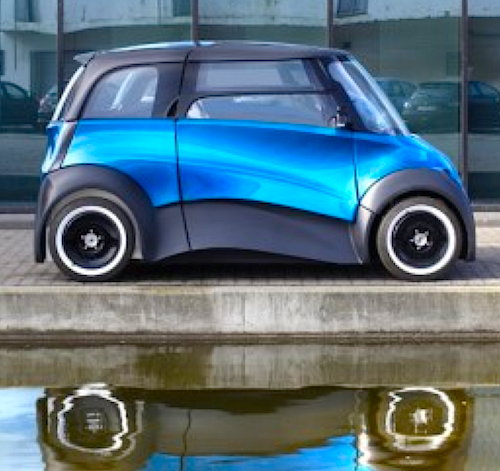 Danish developer and manufacturer ECOmove has made a splash with its QBEAK model and its extended 500 mile range. Now the company estimates it can get it on the road this year, before the end of 2012.
Advertisement

Danish electric carmaker ECOmove has developed a car that can go 500 mile range, which is based on the company's QBEAK electric city car, as fellow writer David Herron wrote in his previous article; 500 Mile electric car being developed in Denmark.

Intelligent Presentation Of The QBEAK. Unlike other electric cars that try to answer every solution, ECOmove’s idea of presenting the QBEAK is sound and logical. This little electric car is intelligently pitched as an urban dweller car, period.

Technically Speaking. Weighing in at 881.4 lbs, 400 kg, its battery pack configuration can be stretched from one to 6, each holding 4.7 kilowatt-hours of electricity, giving all six slightly of 28.2 kWh. This explains how it can reach 180 miles and in order to cover the rest of the 320 miles, a “range extender” is used. By using an intelligent bio-methanol fuel cell system, it effectively increases the range to achieve the mystical 500 mile barrier.

By sporting two in-wheel motors rated at 70kw, the top speed is enough to hit the highway without getting tickets, 74.6 MPH, or 120 km. But the gist remains that its strongest part is its customization. It can be adapted to suit almost anyone’s needs from short city hops to highway longer stretches. Much as its battery pack, it can include up to 6 seats that can be removed in order to make use of its cargo space.

The QBEAK Lifestyle. Thge QbEAK really sales a lifestyle, more than an alternative energy car. By measuring a mere 9.8 ft, that’s only 3 meters, its sliding side doors should make parking easy enough for almost anyone. The smart choice of using alternative light weight materials helps the QBEAK achieve this range and also offer competitive features. The use of a unique chassis platform configuration that allows room for different battery modules, the car also offers a communication system based on a smartphone. Has anyone seen the movie Brazil? Isn’t this a perfect modern candidate for it?

Road Ready For 2012. Looking into the very near future, ECOmove just received an encouraging award; the 2012 European Electric Vehicles Early Stage Investment Opportunity Award from the Frost & Sullivan-company. The company now feels comfortable enough to have it ready units for the road this year.

As you can see from the video, this little car packs some intelligent features, most of which are modular enough to accommodate many. The intelligent strategy with the QBEAK is its modularization, allowing it to serve a specific purpose. But two things are not known yet. How easily “removable” are the batteries and the price. Making the batteries a 5 minute easy process, would make the QBEAK a global hit if it can come in at an affordable price.

The QBEAK is certainly one part of the equation and definitely tackles current electric car issues. In the meantime, we hope to see ECOmove bring its electric QBEAK on our shores very soon.

John A. Tamplin wrote on July 29, 2012 - 3:03pm Permalink
Not sure what the point is of a 500 mile range on a city car (though it does say "based on", but I can't imagine it would be radically different). I suppose a courier service that keeps the car on the road all the day, but that's about it :).
Nicolas Zart wrote on July 29, 2012 - 5:19pm Permalink
That's a good point. I can only think of one, convenience. People love to have a reserve of energy, I guess :) More to the point, according to a few surveys these past few years, 500 miles seems to be the mystical range people are waiting for with cars in general. After that, it's pretty much bragging rights. Yes, 500 miles in a city that could mean weeks on end or a courier's week.
shosho71 wrote on August 6, 2012 - 12:37pm Permalink
Will this be for sale in the U.S.?
Nicolas Zart wrote on August 6, 2012 - 4:37pm Permalink
As of now the plans are onl;y Europe but with anything else, with enough demand it could come over here. Want to start a list of people?