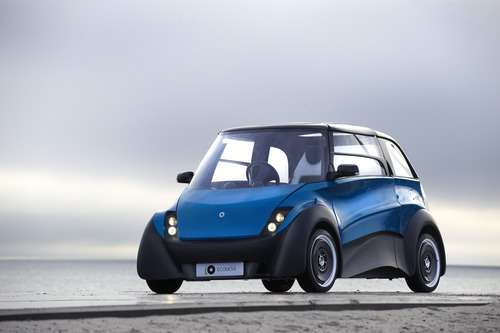 Danish electric car manufacturer, ECOmove, has a range anxiety solution for their QBEAK electric car. The Modular Energy Carrier concept (MECC) is a project between ECOmove, Insero E-Mobility and Serenergy to develop a vehicle they're calling an electric car, with a driving range of 800 kilometers (500 miles), on a highway-speed-capable vehicle.

The QBEAK is a funky little electric car developed in Denmark by ECOmove. As an all electric car it has a modular battery pack system allowing from one to six modules to power the vehicle, and with six modules the QBEAK has a driving range of 180 miles (300 kilometers) and a top speed of 120 kilometers/hr (75 miles/hr) when outfitted with two 70kw motors. Each of the modules can hold 4.7 kilowatt-hours of electricity, giving the car a maximum energy capacity of around 27 kilowatt-hours. The QBEAK is a diminuitively small car that can hold up to six people, and has a flexible interior that's re-arrangeable for a variety of uses. Recyclability is designed into the car, through the use of recyclable materials in its manufacture. The QBEAK is expected to go into production at the end of 2012, and the company is taking reservations now.

An 180 mile electric range is impressive, especially on 27 kilowatt-hours of energy storage. Because the QBEAK is designed as a "City Car" the driving range is, logically speaking, more than enough for even the most sprawling of urban areas. Since Europe isn't exactly known for sprawl one wonders why the MECC project's goal is to modify the QBEAK for a 500 miles driving range. But what's more interesting is the method for transforming a diminuitive 180 mile range electric car, into one with a 500 mile driving range.

One part of that is answered by how the QBEAK is able to deliver 180 miles of range on 27 kilowatt-hours, when the norm in electric vehicles is to deliver a little less than 100 miles range on 24 kilowatt-hours of energy. The trick is to use lightweight, but strong, components. The composite chassis consists of two aluminium sheets separated by a layer of ARPRO; a lightweight material already used in certain automotive applications. The combination is not only light weight, requiring less energy to move the car, but gives good insulation to reduce energy required for heating and cooling, and reduce noise and vibration. The material is also very strong and the company expects to be awarded a five star crashworthiness rating.

What's boosting the range to 500 miles is a bio-methanol fuel cell used as a range extender. Serenergy, a partner in the MECC project, has developed an air-cooled fuel cell with high fuel flexibility and reliable fuel cell operation under extreme temperature conditions. By fueling the fuel cell with bio-methanol, the car is still avoiding the use of fossil fuels, while relying on an energy-dense organic fuel.

Organic fuels are more energy dense than batteries, allowing more energy to be carried on-board than could be carried by batteries alone. The problem with most organic fuels derived from fossil oil (e.g. gasoline or diesel) is that when burned it increases the amount of carbon in the ecosphere, by desequestering carbon that was sequestered millions of years ago. However, biofuels like bio-methanol simply reuse carbon that is already in the ecosphere, and do not increase carbon levels.

The question is whether the QBEAK with a fuel cell is, technically speaking, still an electric car. Technically this would be a fuel cell car (FCEV). Assuming the battery pack can still be recharged directly from the electrical grid, one could also call it a plug-in hybrid. (see When is an electric car not an electric car?) Indeed, ECOmove recognizes this as well where the press release says: "the fuel cell range extended ECOmove QBEAK will have significant benefits compared to competing solutions of other plug-in hybrid electric vehicles or battery electric vehicles."

The goals of the MECC project are: a) A range of at least 800 kilometers (500 miles); b) refueling time of 3 minutes; c) possibility to use the existing energy distribution infrastructure; d) capture waste heat from fuel cell for cabin heating/cooling; e) longer battery pack lifetime due to more stable state of charge.

These goals are consistent with the typical "road trip" scenario, where one gets in their car, drives 300 miles, stops for food and to stretch the legs, refuels the car, then drives another 300 miles. On the other hand, for most people the "road trip" is not their every-day driving habit. Instead the vast majority of driving is 50 miles or less per day, meaning the 180 mile range of the electric QBEAK is more than sufficient for the majority of people.

The QBEAK is already an interesting electric car well suited for around-town use as a "city car" due to its 180 mile all electric driving range. The addition of a bio-methanol fuel cell should extend the range considerably, as the company expects, while maintaining an interesting "low carbon footprint" story.