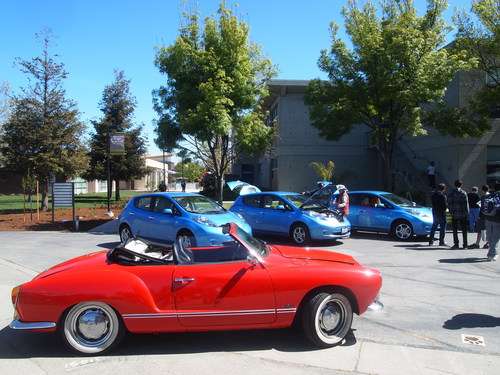 Phrases marketing like "extended range electric vehicle" serve a marketing purpose while creating confusion about the meaning of phrases like "electric car", "plug-in hybrid," and can lead to poor decisions by misinformed car purchasers.
Advertisement

I drive an electric car, not one of the new electric cars from a major manufacturer, but a home built electric conversion of a classic car. My 1971 Karmann Ghia is extremely well restored and catches a lot of attention, after which people notice it's also an electric car, which gives them a whole new level of appreciation for the car. Almost every time I drive this car someone will approach and start asking questions. Today's questions included one about "fuel efficiency" of the car, and when I answered this car does not take "gallons", she exclaimed "Oh, it's an all electric car like a Chevy Volt?" Ignoring the inner sigh, I mumbled "yes" and, because I was blocking traffic, drove away.

The problem is that the Chevy Volt, while an excellent car, it is not an all electric car. Technically the Volt is a plug-in hybrid, but GM muddies the waters by insisting on the phrase "extended range electric vehicle" (EREV). Enough are confused that it's worth going over the distinction between an all electric car, and a plug-in hybrid like the Chevy Volt. The confusion is not just among the random passerby, but extends to "journalists" for some major news outlets, one of whom published an article over the weekend claiming the Prius Plug-in is an all-electric car when in fact it is a plug-in hybrid.

An all electric car (AEV) or battery electric car (BEV) has only an electric drive train, and uses batteries to store electricity. These cars of course plug into some kind of electrical outlet to recharge. My Karmann Ghia plugs into regular power outlets, or through a converter box, can charge at a J1772 charging station. In the era before manufactured electric cars were available, those of us who wanted electric cars had to build our own by converting gasoline powered cars. Manufactured electric cars include the Coda electric car, the Ford Focus Electric, the Mitsubishi i-MiEV, the Nissan Leaf, and the Tesla Model S.

The normal hybrid car (HEV), like the Toyota Prius, does not allow the car owner to recharge the battery pack from the electrical grid. Every joule of energy sent to the wheels ultimately comes from burning gasoline. The hybrid drive train is there mostly to increase the efficiency of gasoline use, but does nothing to erase the need for gasoline.

A plug-in hybrid car (PHEV) is organized a little differently in that the battery pack is larger, and can be independently charged from the electrical grid. This means you can drive some distance, determined by the size of the battery pack, purely on electricity and not burn any gasoline. With care you can extend the electric-only driving quite a ways, with some Chevy Volt owners spending months between going to the gasoline station to buy gas.

General Motors, in its infinite wisdom, muddies the water a bit by insisting the Chevy Volt is an "electric car" with a range extending gasoline engine/generator. This is a very pragmatic choice on GM's part, and clearly the Chevy Volt's strong sales indicate it was a strategically wise move. GM's marketing effort notwithstanding, the Volt combines two sorts of power systems into one vehicle, and the car can be plugged in to recharge the battery pack, making it a plug-in hybrid. Indeed the EPA sticker for the Volt says "plug-in hybrid," and likewise on fueleconomy.gov the Volt is shown alongside the Fisker Karma and the Toyota Prius Plug-in, all of which are plug-in hybrids. Fisker Automotive, to muddy the waters even further, created yet another phrase, "electric vehicle with extended range" (EVER) to describe their plug-in hybrid drive train.

Another word which confuses some is "electrified", a word invented by Ford Motors to describe any vehicle with "electrification" features. The usage of the term applies to every drive train type from "mild hybrid" to "plug-in hybrid" to "all electric" (battery electric) vehicles. The words "electrified" and "electrification" are useful to Ford to describe the company's overall strategy of working with a variety of drive train technology developments in parallel. However some get confused by the word and think that Ford's projection that in 2020 electrified vehicles will represent 20% of the company's sales, that means 20% of Ford's vehicles will be electric. No, it's that 20% will be electrified. These are different words, with different meanings.

We want to be using the correct words, to contribute to a better understanding of the things we talking about. Using one phrase like "extended range electric vehicle" for a widget with a well known description like "plug-in hybrid vehicle" simply causes confusion. There are significant distinctions between a plug-in hybrid and an all electric car, and those confused over these distinctions could make poor decisions. There is a parallel here to the "Label GMO's" movement, in that by labeling those foods which contain GMO's we can be better informed on the distinction between one kind of food and another kind of food. We are talking about two kinds of efficient electrified cars, and by being better informed about the distinction between the types of electrified cars we can make better decisions on which to buy.