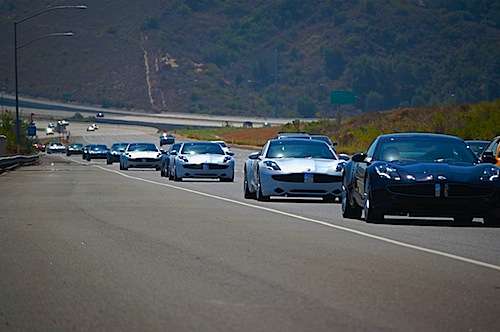 Charging more than one electric cars at the same time takes juice and a little bit of planning. 45 Fisker Karma owners broke the world record for the highest number of mixed-brand electric vehicles to be charged simultaneously.
Advertisement

If you thought charging two cars at the same time was an energy and logistics nightmare, try 45. That’s what happened at an event organized by the company’s Dutch retailer, Fisker Nederland when 45 Karma plug-in hybrids owners recharged their battery packs at the same time. And they said it couldn’t be done!

Breaking Charging Record. Breaking the previous record set in May of this year with 43 cars recharged, this record was confirmed by Stichting E-Laad, the Dutch foundation for the promotion of electric driving. This was done via the initiative of Fisker Automotive’s most successful European representative, Fisker Nederland, which sold more than 130 Karmas already since January 2012.

Part of the first ‘Good Karma Day’ for Dutch Fisker Karma owners, the charity event made donations for every Karma sold by Fisker Nederland to the Eugène Janssen Foundation to support African children living in dire circumstances. The organized event was held on Sunday September 2 at the Floriade Horticultural World Expo in Venlo, Netherlands, where 60 240-volt charging points were temporarily installed. The Floriade event promotes innovation and the sustainable relationship between man and nature, while teaching how to return to nature and how to learn from it.

According to Bernhard Koehler: “We are excited that as an American car company we have had so many European Karma owners make this world-record attempt a success. They have helped make history and show that electric vehicles with extended range are the future.”

This comes on the heels of not so great news from the electric plug-in hybrid luxury maker who suffers from growing pains. After a second car caught on fire without harming its owners or anyone, the press had a barbaric frenzy feed on the occurrence.

Nonetheless, charging more than one car is no small feat, both logistically and energy wise. Different cars will have different charges and will give the charging stations various amounts of information. All of this needs to be managed intelligently in order to recharge in the most optimal way. This shows yet once again how the electric drive world is making great strides and has clearly associated its self with a better, greener way of living. So, congratulations Fisker Karma on charging 45 Karmas simultaneously.