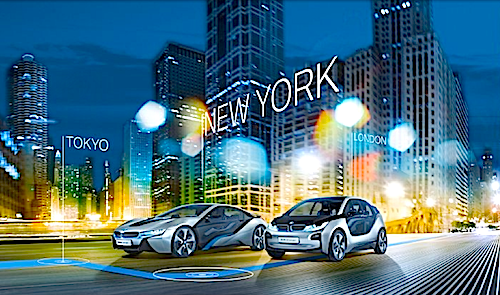 After having been shown in London, Paris, then around the world the i8 Spyder will come to North America in a few weeks. BMW is bringing the i3 and i8 and the "Born Electric" to the U.S.
Advertisement

They’re here… And so BMW is making good on years of research in order to jumpstart the electric and plug-in hybrid competition globally. What hasn’t been said about BMW’s all-electric i3 and its stunning plug-in hybrid, PHEV i8 that hasn’t already been said? Cool? Funky? Breathtaking? How about gutsy! BMW has shown some truly thinking outside the box when it comes to embracing the electric drive.

The Born Electric Tour. Take your pick, we’ve talked about all aspects of the BMW i technology. In this article, we talked about the i3 “spy shot”. In this one, we talked about how the cars were built using an ingenious mix of light sturdy materials and how BMW is trying to make that at an affordable price, and finally here, we find out about the price of the i8, don’t get too psyched, this is a high-end BMW after all.

The Born Electric tour innovates in many ways as it aims to show how much thinking BMW has put into introducing an electric and plug-in hybrid. The experience includes the option to rent another of their “efficient” cars, should the need arise. This option will insure you are never stranded and have a positive experience with electric cars. But while all of this was interesting, on this side of the pond we looked at it with long views. The Born Electric Tour is finally heading our way.

i3 & i8 In The U.S. BMW wants to show in some of our largest cities how it sees the future of urban mobility, particularly as it relates to the electric drive. By hosting a slew of technological demos and interactive displays during the event, as the tour was designed to do, it will show the public what to expect from BMW’s up and coming electric cars.

The Hackathon Challenge. In case you want to have your claim at history and glory, BMW wants you to get involved in the future of EVs and PHEVs. The company will host what it calls a "hackathon" to challenge developers to design apps dealing with environmental concerns. A panel of judges will pick the winners based on originality, the ability to articulate what the app does and all apps will support either iOS or Android.

Start In New York. Starting with the obligatory New York stop from the 14 November to 18 November, 10 a.m. to 10 p.m. at Bryant Park, 1095 Avenue of the Americas, 42nd Street/6th Avenue, BMW i will present its Megacity Vehicle, the BMW i3 Concept, as well as the BMW i8 Concept Spyder. Both cars will be part of its future mobility services under the Born Electric tour. You will be able to experience the unique exhibition at Bryant Park and gain more information about the sustainable and holistic approach BMW is using with its i technology.

It’s good to see BMW taking the electridrive seriously but what is even more impressive is to see how far it has come. In as little as four years, they have managed to build two prototypes, an electric compact vehicle called the i3 and an engaging plug-in hybrid with its i8. What is also impressive is that the final version so far of the i8 is remarkably close to the out of this world prototype it showed us at the Los Angeles Auto Show back in 2009.

We can only hope BMW will continue this trend forward and that others will adopt a similar stance. In the meantime, go and see what the BMW Born Electric tour is all about and get up and close to its all-electric i3 and plug-in hybrid i8.