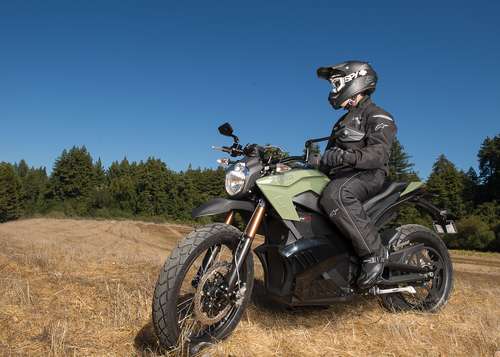 Electric motorcycle manufacturer Zero Motorcycles unveiled today their 2013 model line. The new models feature massive improvements over the 2012 line in speed, performance, riding range, as well as smart phone apps. The company is the only such manufacturer to sell a full range of electric motorcycles, and they have been in this position for several years now. Most importantly, in most respects Zero has leapfrogged rival Brammo, while keeping a lower price point.

Zero's lineup includes five electric motorcycles, all inspired by the dirt bike side of motorcycling. The models include the Zero DS, a dual sport bike, the Zero S, FX and XU, all street legal bikes, and the Zero MX, a dirt bike. Between 2012 and 2013, the company dropped the Zero X, and added the brand new Zero FX.

Top speed has increased to 95 miles/hr on the Zero S and DS, up from 88 miles/hr top speed for the 2012 S. The Zero MX has also seen a massive speed increase, up to 85 miles/hr from 54 miles/hr for the 2012 model. The Zero FX, new for 2013, also has a top speed of 85 miles/hr. This is due to an all new electric motor, the Z-Force, designed by Zero Motorcycles. The new motor is the same size and weight as the 2012 motors, but packs 125% more power and 91% more torque. It produces a higher power-to-weight ratio, while remaining an air cooled motor, thanks to a design which puts the heat producing elements on the outer part of the motor, allowing heat to be extracted with aluminum fins.

The higher top speed will mean two things in electric motorcycle racing. First, in the TTXGP's eSuperStock award the speed gap between the Zero's and the top end bikes will shrink a bit. Second, when Brandon Nozaki Miller goes for his 2013 land speed record attempts he'll have a faster base speed to start with. With a 2012 Zero S he set a 101.652 miles/hr land speed record for electric motorcycles under 150 kilograms.

For comparison, the Brammo Empulse is specified with a top speed over 100 miles/hr, 46.5 ft-lbs torque, and 40 kilowatt (54 horsepower) motor. Riding range is 121 miles city, or 56 miles at 70 miles/hr highway speeds. In most regards Zero's S and DS have leapfrogged Brammo's Empulse. The Empulse is a lot heavier at 470 lbs, than is the Zero S and DS which weigh in at 382 lbs and 395 lbs respectively.

The 2013 models also support a bluetooth connection, and companion iPhone or Android apps. The smartphone apps have two modes. While riding it serves as a customized dashboard showing additional information over the built-in dashboard. When stopped the rider can adjust acceleration, top speed, and regenerative braking behaviors to give the bikes a customizable riding experience.

A curious addition is an optional CHADEMO model to use DC Fast Charging stations for a 1 hour complete recharge. While the fast recharge time is welcome, the CHADEMO standard is on uncertain footing. The automobile industry appears to be moving away from CHADEMO with most of the automakers backing the SAE DC Fast Charging system instead. As Zero says there is a strong effort underway to deploy CHADEMO fast charging stations, and Nissan is sticking with its choice to use CHADEMO. That means that while the SAE DC Fast charge system should be widely deployed in the future, in the short-to-medium term CHADEMO is an excellent choice for fast charging.

Zero DS: Comes in either 8.5 kilowatt-hour or 11.4 kilowatt-hour capacities. This means a maximum city riding range of 126 miles, which drops to 61 miles at 70 miles/hr highway speed. Top speed is 95 miles/hr, due to a 54 horsepower motor and controller, at 68 ft-lbs of torque. Fuel efficiency is a whopping 426 MPGe.

Zero S: Comes in either 8.5 kilowatt-hour or 11.4 kilowatt-hour capacities. Maximum city riding range is 137 miles, which drops to 70 miles at 70 miles/hr highway speed. Top speed is 95 miles/hr, due to a 54 horsepower motor and controller, at 68 ft-lbs of torque. Fuel efficiency is a whopping 463 MPGe.

Zero FX: The company bills this bike as a 'do anything ride anywhere' urban electric motorcycle. The motor is configured for 44 horsepower maximum, 70 ft-lbs of torque and an 85 miles/hr top speed. Riding range is 70 miles city, and 31 miles at 70 miles/hr highway. Fuel efficiency is 470 MPGe.

Zero XU: This bike is configured for lower power, with a 250 amp controller versus the 420 amp controller used for Zero's other bikes. This gives it a lower top end speed, lower power, but longer riding range. Top speed is 77 miles/hr, with 28 horsepower and 42 ft-lbs of torque. Riding range is 76 miles city, and 35 miles at 70 miles/hr highway. Fuel efficiency is 512 MPGe.

Zero MX: This is Zero's remaining off-road-only bike. Top speed is 85 miles/hr, thanks to the 54 horsepower 68 ft-lbs torque drive train. Riding range is quoted as 50-140 minutes of trail riding, or 35-120 minutes of track time. Unlike the other bikes in Zero's lineup which all use a belt to drive the wheels, the MX uses a chain.

The bikes can be ordered now through dealers. Deliveries begin in January 2013 in the USA and February 2013 in Europe.

"With up to 137 miles range in the city, a top speed of 95 mph and a CHAdeMO accessory that allows recharging in around an hour, the 2013 model line is truly exceptional,” said Richard Walker, CEO of Zero Motorcycles. “This year's lineup offers breathtaking acceleration, new eye-catching designs and the innovative ability to customize the riding experience to each individual's preferences via a mobile application. We invite consumers to discover the experience of riding a 2013 model by contacting an authorized dealer to sign up for a test ride or to place an order. The new lineup arrives in January."

Anonymous wrote on October 2, 2012 - 9:09pm Permalink
The short range of these bikes go against what motorcycling is all about...cruising along long, windy roads without a care in the world...and that means not worrying about distance. Even with a 120 mile range, this effectively means you can only ride 60 miles out and back before you run out of juice. Love the idea of a green motorcycle, but considering the price and lack of distance, it doesn't seem practical at all.
David Herron wrote on October 3, 2012 - 6:59am Permalink
With the growing number of charging stations in the public it means you're not limited to a radius around your home. Especially if you buy the CHADEMO accessory.