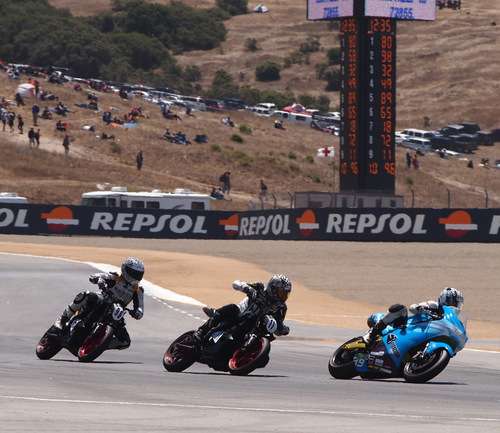 Will the 2012 TTXGP World Championships be the most exciting electric motorcycle race yet?

The TTXGP World Championship race at Daytona International Raceway is shaping up to be an exciting race, that will be the largest ever electric superbike, with potential results that are too close to call ahead of time.
Advertisement

The TTXGP World Championship race in October is shaping up to be a major electric superbike shootout. Friday's win by Barracuda Lightning Motorcycles in the FIM e-Power/TTXGP race at Le Mans, and the other matchups throughout the 2012 TTXGP and e-Power seasons, demonstrates that the top four teams are not only very close, but are performing at proper superbike levels. Superbikes that happen to be electric.

If we look over the 2012 season we see the top tier bikes and riders had close results to each other. The top tier teams, Barracuda Lightning, Team Icon Brammo, Muench Racing, and Zongshen, are split between the European and North America series meaning that all four have not yet raced each other in a single race. Each have met each other in various races, but not all at the same time. While we are focusing on the top tier TTXGP teams, there are other teams in the series in the TTX75 and eSuperStock award groups. While the racing action in the eSuperStock and TTX75 awards are exciting in their own right, it is the top tier teams who are getting the most attention if only because these top bikes and riders are so close to gas powered superbike performance.

The TTXGP World Championship race at Daytona International Raceway in late October is a by-invitation race that will feature the top teams from the TTXGP Europe, North America and Australian series. As we write this the relevant teams on those continents are surely checking their travel budgets and pondering a trip to Daytona in 42 days. We won't know the race makeup until the time of the race.

Muench and Zongshen have raced each other several times in the TTXGP Europe series, and generally riders for Muench have beaten Zongshen's riders. For example, at Assen on Aug 6, Matthias Himmelmann (Muench) won, beating two of Zongshen's riders by about 20 seconds, and the third by over 60 seconds. At the Snetterton race, in early July, Himmelmann's margin of victory over Zongshen's Ho Chi Fung was only 2.1 seconds.

In the e-Power/TTXGP race at Le Mans, while Barracuda LIghtning again beat Muench's Himmelmann, this time it was only by a 1.9 seconds margin. Lightning had a new rider in the saddle, Miguel Duhamel who, despite being one of the winningest racers in the AMA, had not ridden an electric bike before arriving at Le Mans. There was a dramatic change in the margin of victory between the races at Laguna Seca and Le Mans, and it is difficult to know where to attribute this change. Perhaps Muench did some testing and refinement? How much effect is Duhamel's inexperience with this specific bike? Or is it just a matter of "that's racing?"

Between the Laguna Seca and Miller Motorsports races there was also an interesting change in the results within Team Icon Brammo. At Laguna Seca, Eric Bostrom had just joined the team and was still getting accustomed to the bike, and finished 10 seconds behind team-mate Steve Atlas. Between then and the Miller race, Bostrom had done extensive testing and development on the Brammo Empulse RR, and at the Miller Motorsports race Bostrom finished nearly 17 seconds ahead of Atlas.

There is another top tier electric motorcycle racing team, MotoCzysz, who is almost certainly unable to attend despite that teams historic win at the TT ZERO race earlier this year. MotoCzysz unfortunately did not complete any TTXGP races this year. If MotoCzysz were to show up, they're likely to be a serious contender, if only because MotoCzysz is the only team which has consistently beat Lightning.

Which team will win the TTXGP World Championship at Daytona? The easy guess is Barracuda Lightning, because that team has beaten all these top tier teams. But the results have been close enough among the matches to make it a toss-up. A wild-card in this is Eric Bostrom who showed a large gain over his team-mate Steve Atlas between the races at Laguna Seca and Miller. There is also the nature of racing where the result could well be a big surprise. For example in the joint e-Power/TTXGP race at Oschersleben in August, Zongshen's Tang Yu ended up winning after other racers from Zongshen and Muench had to bow out due to motorcycle failures.

The electric motorcycle racing scene has already made several important steps forward in 2012. Such as MotoCzysz breaking the 100 miles/hr lap speed barrier in the 2012 TT ZERO. Additionally, in the e-Power/TTXGP Laguna Seca race five bikes finished with lap times within the qualifying bracket for gas powered AMA superbikes that same weekend. The 2012 TTXGP World Championship could be another major milestone for electric motorcycle racing. There could be three or four top tier electric superbike teams in the same race, and each team should be able to field two or more bikes apiece. If so, it will be the largest number of electric superbikes competing against one another at one time, making it one of the most significant electric motorcycle races to date.