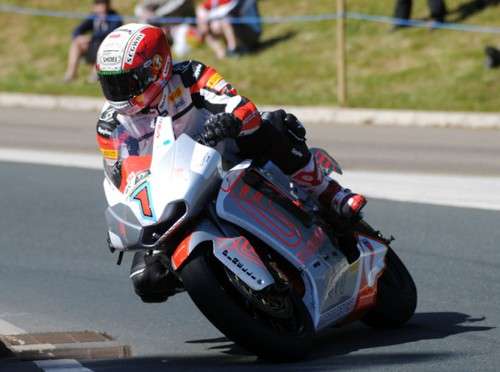 In a historic win, Mike Rutter, riding for MotoCzysz, won the 2012 TT ZERO, and along the way broke the ton, meaning a lap speed greater than 100 miles/hr. John McGuiness, riding for MUGEN Shinden, came in 2nd and Rutters teammate Mark Miller taking third. All three "broke the ton," but it is Rutter who wins the £10,000 prize fund offered by the Isle of Man government for the first rider to make this achievement.

The Isle of Man has been rainy the past few days, delaying the start of the race, and riders interviewed by Manx Radio just before the race were nervous. Race officials issued a warning to riders to expect damp conditions all around the track, and limited visibility on the mountain portion of the course. However once the race began the riders must have left their nervousness back at the starting line, because Rutter, McGuiness and Miller all turned in excellent results.

The race started off strong with Rutter, McGuiness and Miller all hitting faster and faster speeds at each timing point, that is until reaching the mountain section of the course. The race format is a time trial, meaning the riders are racing to see which one turns in the fastest lap speed (time). Rutter reached a 119 miles/hr indicated lap speed at the Ramsey timing point, but of course the mountain took its toll on the riders speed.

Of the 8 teams which started several retired, with most retirees bowing out before the first timing point. That left five teams in competition for most of the race. These were: Mike Rutter (MotoCzysz), John McGuiness (MUGEN Shinden), Mark Miller (MotoCzysz), Yoshinari Matsushita (KomattiMirai Racing from Japan) and Rob Barber. But Matsushita retired before reaching the mountain.

At the Sulby speed trap Rutter was clocked at 126 miles/hr, with Miller and McGuiness clocked a bit faster. During practice on Sunday, Rutter was clocked at 154 miles/hr at Sulby, but reportedly was going slow at the end of that practice lap indicating his bike had nearly run out of energy. The strategy will have been to take it a bit easier today to ensure having enough energy to run well throughout the race, and maybe have enough for a strong sprint at the end.

A surprise came when McGuiness apparently reached the Bungalow timing point before either Rutter or Miller. This didn't seem right because Rutter had been in the lead the whole way. The confusion sorted itself as being a transponder error when, by the Cronk ny Mona timing point, Rutter and Miller reappeared on the results board.

The Isle of Man TT Week is a racing event with over 100 years of history. It is a 37.5 mile course winding around the regular roads on the Island, and climbs over Mount Douglas to an altitude of 1400 feet. It is among the toughest racing courses in the world. The gas bikes race for two laps on this track, and the electric bikes racing under the TT ZERO name race for only one lap. It will take a breakthrough in battery energy density before the electric bikes will go for two laps. Electric racing during TT Week began in 2009 with the TTXGP, but starting in 2010 the Isle of Man Government took over the electric program under the name TT ZERO.

VICTOR wrote on March 14, 2015 - 5:57am Permalink
Hello good people! Sorry, but writes and draws for great help disabled SA KUZNETSOV VIKTOR G.. leg I got injured in the performance of military duty while serving in the Soviet army. Had many complex operations on the leg in the hospital-and a positive result will not have synonyms. doctors and sent home with the disease was unclear on its citizen. Civilian doctors have identified a group of disability. And appointed a disability pension-5500rublej-for my health left while serving in the owls. Army. At work do not take as a result of their disability in the legs. Bureaucrats State service officials turned away from the problems of the poor invalid s/a. and especially officials of the SOBESSA. They have requested assistance in the purchase of a car in which very need. Still getting negative replies from the Government officials-bureaucrats saying that they are not sent in the army. And the money that is transferred from the Ministry of the country divide among themselves. They are little and they don't need the problem of poor disabled SA. and you-sick man had on a white light as you want-it's not and Hee problem. Sorry-this pain will understand only cardiac Mr leader-who moved the vital problem of a stranger or his relatives. I am a very rich man with a small pension-200000rublej while remaining for months on the water and pieces of bread at my dream acquisition. to help the poor, the disabled person SA out of poverty and provide jobs. I hope good cardiac Mr can help managers and employees to fulfill the dream of a normal life with amazing machine I hope your company does not leave behind the poor patient with his dream-how do bureaucrats officials. and especially social SECURITY officials-our country of FOOLS and WISE MEN and select a gift from the reserve fund is one amazing car, or sell for my COFFIN-MONEY. After all, a solid avtofirma-not a poor man from a single machine which is on social services to the poor, the disabled person SA. This will have a major positive advertising of your Mr in our city and region. As well as great human appreciation from the residents of our city and region by car. I hope that you nekamennoe heart as the civil service officials and bureaucrats will help a disabled person. Thank you in advance for your help. If you cannot select the car, then select the financial assistance for the purchase of b./w. car in our country. Bank requisites. DOLLAR-USA NATIONAL BANK TRUST \NBTRRUMM\\ acc. #890-0372-664 with bank of New York Mellon. N.Y. \IRVTUS3N\ L-42305840008031097142 RUBLI Branch of national Bank TRUST\ JSC\ in g Ulyanovsk BIC 047308876, INN 7831001567 to\from 30101810700000000876 L\ACCOUNT 42305810308031097131 KUZNETSOV VIKTOR GRIGORIEVICH. For earlier heartfelt hank you for using the purchase of a car for the disabled owls. army. Which needs. My data= tel-89619020273. RUSSIA, ORENBURG REGION, , NOVOTROITSK, ST. SOVIET-111-113. VIKTOR KUZNETSOV