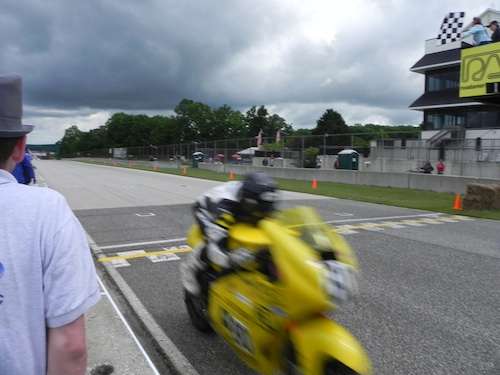 Heading into its fourth year of racing, the TTXGP electric motorcycle racing series has seen rapid growth and an amazing list of accomplishments.
Advertisement

In early 2009 news broke of a new racing series, one that would focus on electric motorcycles, the TTXGP. Unlike most other electric racing series which are low key events out of the spotlight, the TTXGP's inaugural event was the legendary Isle of Man TT Week, one of the premier and longest running motorcycle racing events in the world. The TTXGP organizers were on a quest to change motorsports, and knew they had to make big bold moves, such as using TT Week as their first event. Today, at the 1000 days mark, the TTXGP has changed the conceptualization of what "green motorsports" is, and demonstrated that some year soon electric motorcycles and perhaps electric cars will have a significant presence in motorcycle racing.

Why race with electric motorcycles or electric cars? It's the same answer that Tesla Motors had for adapting a Lotus sports car to be the Tesla Roadster. The stereotype that electric vehicles can only be slow boring ugly golf carts is keeping some from adopting electric vehicles, making destruction of this stereotype of primary importance in the transition to a more sustainable transportation system. If an electric vehicle race can be just as fast and exciting as a gasoline powered race, then why do racers need to burn gasoline, and why shouldn't the general public go ahead and buy electric vehicles? Another factor is the role racing has in developing vehicle technology. The tradition for generations has been to prove new technologies on the track, and to use racing to accelerate technology development.

TTXGP's first year, 2009, was in many ways the bootstrap year. There were two TTXGP events held that year, the first on the Isle of Man received global attention and caught the imagination of many, while the second was a little-noticed event in Ohio that was crucial for what was to come. The Ohio event gave TTXGP organizers a chance to meet with AMA officials leading to an agreement allowing TTXGP races to be held during AMA superbike race weekends.

The 2009 Isle of Man TTXGP received international attention with nearly 20 electric motorcycles participating. While it was Brammo, Mission Motors, and MotoCzysz that garnered most of the attention leading up to the race, it was Team Agni's bike ridden by Rob Barber which won. Only one of Brammo's bikes finished the race, high profile Mission Motors finished in 4th place, high profile MotoCzysz and several other teams didn't even finish. The Snaefell Mountain Course is one tough race course.

Agni Motors is an electric motor design and manufacturing company based in India which primarily exists as the outlet for the work of visionary motor designer Cedric Lynch. Their winning bike had two of the Agni motors mounted shaft-to-shaft with the motors in an outboard position in the airflow for good cooling. This design was used by many teams in the 2010 season.

The TTXGP 2010 season was launched with another fanfare of attention in May at the Infineon race-track. It featured a dozen or so teams, from as far away as Virginia and Ohio. The Infineon race featured a dramatic battle between the Zero/Agni bike that had won the 2009 race, and a new bike from Lightning Motors, with Zero/Agni winning. Lightning Motors went on to sweep the rest of the 2010 North American TTXGP races after working out the handling issues limiting them in the first race. The North American series spanned four races in California, Wisconsin, Canada and VIRginia.

The 2010 TTXGP season included two whole series held in Europe. The first was a series of races in England of nearly a dozen British teams and one team from Sweden. The other, TTXGP Europe, was organized late in the 2010 season and allowed several more teams to participate. Notable in that series was the battle between Italy based CRP Racing, and Germany based Meunch Racing.

The 2010 season culminated with a grand championship race held in Albacete Spain featuring a tight race between CRP and Meunch. Where CRP had won the TTXGP Europe series, Meunch won the championship race. Lightning Motors did not make it to Spain, which would have made it a very different race.

Many bikes racing in the 2010 season used the twin-Agni-motor design which won the 2009 Isle of Man race. Most of those bikes were built by Mavizen, the sister company to the TTXGP itself, and were leased by Mavizen to interested race teams. Interestingly the winners of the North American series and the grand championship race, Lightning Motors and Meunch Racing respectively, used high powered AC motors instead.

The TTXGP 2011 series again launched in May at the Infineon race-track, this time with a much smaller field. Mission Motors showed up but did not race, and Lightning Motors wasn't able to finish their bikes in time and also did not race. This seemed to set a tone for the North American series which initially was scheduled for five races but after several SNAFU's was only three races.

Each year better technology on the bikes meant better performance and speed. In 2010 where the top bikes were 10 seconds slower than the 600cc superbikes, in 2011 the top bike ran at speeds that would have been competitive in the much higher powered MotoGP with many bikes equaling the speed of 600cc superbikes. It means that, today, electric motorcycles can race fast enough to go against gas powered superbikes, but they don't have the range for a gas bike race. While gas bike races last only 60 miles or so, the electric race bikes have enough range for a 20-25 mile race because of battery energy density.

Each year sees more companies supplying parts or whole bikes for the TTXGP. These companies include CRP, Meunch, Lightning, Brammo, Mavizen, Manzanita Micro, A123 Systems, and Ener1. CRP, Meunch and Lightning have announced an ability to sell or lease bikes to race teams, and in the 2013 season Brammo plans to make a race-ready version of their Empulse.

For 2012 the TTXGP has announced an agreement with the EUM, the European Federation of the FIM, to sanction TTXGP Europe. This adds to agreements TTXGP already has with AMA, the ACU and the BMF for sanctioning in North America and the UK. While the schism with FIM itself still exists, TTXGP's agreements with continent-level organizations within FIM's umbrella are growing.

The TTXGP is also moving towards electric car racing by expanding its format to include many more vehicle classes. Today TTXGP races support only two electric motorcycle classes. For the 2013 season the series is planned to include several electric car classes. During the 2012 season the Quimera AEGT All-Electric GT car is expected to make exhibition runs at several American LeMans races.

In the coming years higher energy density batteries are sure to be developed that could enable building an electric race bike fast enough and with a long-enough range to be competitive in a gas bike race on equal terms with the gas bikes. When that happens the racing world could ask themselves why do they need to continue burning gasoline to race.

Stephen Bieda wrote on January 30, 2012 - 10:23am Permalink
I can't quite make out the clip at the very end very well. Who is the fossil at the end of the video clip saying something like, "they come here to see our men race our motorboad, not piss about on battery powered scrap". Hilarious stuff! Cool video.