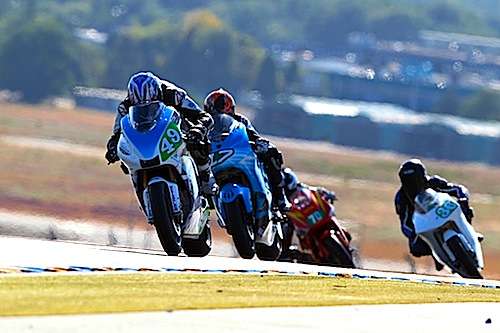 Miguel Duhamel has officially joined the team and thanked them with a first-place win at the Le Mans TTXGP/FIM e-Power International Championship this week in France. Duhamel finished the race in just eight laps clocking in at 1:49.200. Duhamel ran the fastest bike on the track at yesterday’s practice round, 1.634 seconds faster than the next closest bike.

Barracuda-Lightning & Duhamel. After the Barracuda-Lightning team devised a battery management strategy to win the race, it was up to Duhamel to bring that race strategy to a winning end. But Duhamel, the former AMA Pro American SuperBike Champion and five-time Daytona 200 winner strategically joined the team when Michael Barnes was unable race due to other commitments in order to lead yet again Lightning to another win. With 32 race victories under his belt, Duhamel and his second all-time AMA SuperBike record is a natural for electric motorcycle racing.

Miguel Is The Winning Ticket. According to Richard Hatfield, CEO and founder of Lightning Motorcycles: “Miguel’s winning experience, ability to solve problems and suggest improvements to our engineering team helped push us to the next level of performance. The Barracuda-Lightning engineering team worked around the clock this week prepping the bike, and that hard work paid off with a win. The motorcycle fans were amazed by the raw speed of the bike on the front straight at Le Mans. We are very much looking forward to bringing the street version of our Lightning SB2 to the European markets in the near future.”

Duhamel added: "The Lightning is very powerful but you have to pace yourself to preserve the batteries for the end of the race. It was a fantastic race and a great win for the Barracuda-Lightning team.”

Performance is there and fans will surely rejoice. Consider the International FIM e-Power record for April 2010 was 2’19.239 by Thomas Betti, and you can see how quickly the pace is evolving. With three continental international races, the TTSGP and FIM e-Power races have headed out to Europe before tackling Australia.

Duhamel’s 1:49.200 on the Barracuda Racing Team with its Lightning motorcycle is sufficient proof that motorcycle e-racing is not only mature but has gathered enough internal talent to become a bona fide racing series worth following.

oobflyer wrote on September 10, 2012 - 11:33pm Permalink
Simply amazing. I'm been riding electric motorcycles four years - the progress in technology that I've seen in that time is remarkable. Once these things are mass produced and come down in price I'm sure they'll be everywhere.

Tesla Contemplates A New Strategy for China Retail even As Sales Boom
Jay Leno on Elon Musk & EVs: “I Think He Should Get ... Credit"
END_OF_DOCUMENT_TOKEN_TO_BE_REPLACED