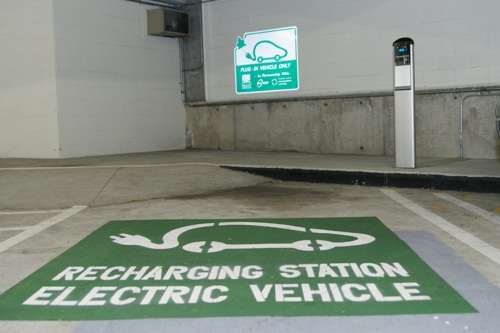 What's the cost to charge an electric car at a public station, and why

Every so often an electric car owner discovers a public charging station costing $3 per hour to charge their car. Their reaction isn't always positive because of the fee paid per mile of range received by charging.

The public charging stations fall into three groups. The first group is the stations in one of the two electric car charge station networks in the U.S., the Blink Network run by ECOTality, and the ChargePoint network run by Coulomb Technologies. The second group are the other public charging stations that aren't in one of those networks. The last group are the stations, in California and elsewhere, left over from 10 or so years ago when electric cars were last manufactured by the automakers.

For the stations where users pay to charge their cars, the effective cost per mile is calculated from two factors. First is the cost per hour to use the charging station. Second is the number of miles of range the car gets per hour of charging. The electric cars with a 3.3 kilowatt on-board charger (Nissan Leaf, Chevy Volt and Mitsubishi iMiev) typically get 12 miles of range per hour hour of charging. Hence the stations that cost $3 per hour, costs $0.25 per mile of range. On the other hand the cars with a 6.6 kilowatt on-board charger (Ford Focus Electric and Coda Sedan), if charging at a station that costs $3 per hour, costs $0.12 per mile of range. To compare with gasoline, if a car gets 30 miles per gallon fuel efficiency and gasoline costs $3.50 per gallon, the cost per mile for gasoline is $0.12.

A quick perusal through the interactive map on mychargepoint.net shows a wide range of charging station fees from "free" to $3.95 per hour for some stations in New York City. Stations in the Charge Point network are privately owned, in a sort of franchise arrangement, with the Charge Point network collecting data about usage and managing customer fees. Each station owner sets the fees for their stations according to their business determinations.

Access to electric car charging stations on the Blink Network has been free, but in the Spring 2012 fees will start. These fees depend on your membership level which are are, $1 per hour for Blink Plus members, $1.50 per hour for Blink Basic members, and $2.00 for Guests who do not have a Blink membership.

In the U.S. today there are approximately 150,000 gasoline stations. Without those gas stations the gasoline powered cars would be useless heaps of metal. While an electric vehicle can be charged at home with electricity bought through the home-owners utility bill, if that was the only place the car could be charged its effective daily range would be half its total range. That is, the car owner could only drive far enough away from home to be able to return home. To make longer trips will require a network of public charging stations so the car can be charged throughout the day as they go from place to place. The availability of those charging stations and the fees to use them are still a work in progress.