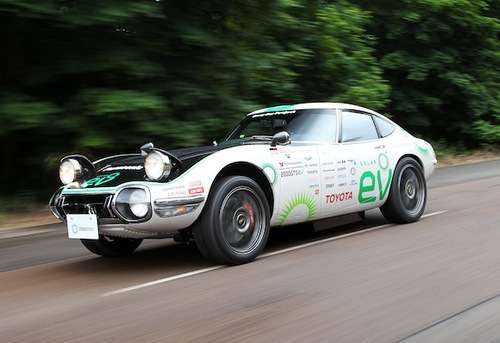 Is Toyota developing an electric sports car to rival the Tesla Roadster?

An appearance of the Toyota 2000GT SEV at the Goodwood Festival of Speed has sparked rumors of Toyota "going after Tesla" with an electric sports car.
Advertisement

A rumor is circulating that Toyota is developing an electric sports car that could rival the Tesla Roadster. While that's a curious claim considering that Toyota owns a chunk of Tesla Motors, the company did develop the Crazy Project Car (an electric Toyota 2000GT SEV), and signed an agreement with BMW to work on several chunks of technology, that may include an electric sports car. Coincidentally, at around the time Toyota and BMW signed the agreement, the Toyota 2000GT SEV made an appearance at the Goodwood Festival of Speed, in the UK.

The Goodwood Festival of Speed is a large motorsports event in England that's, well, focused on fast vehicles. This year several electric vehicles made a showing such as Lord Drayson's electric race car, and the Toyota 2000GT SEV. That car was first unveiled last winter in Tokyo, and is a very neatly restored 2000GT with an electric drive train and oodles of advanced technology under the skin. The 2000GT SEV was a one-off prototype built in collaboration with a long list of companies. Instead of an inline-six gasoline engine, it is powered by a 37 kilowatt-hour battery pack supplying a 120kW (161bhp) electric motor to drive the rear wheels. High tech instruments and control systems are just beneath the skin of this old school 1960's sports car.

Naohiko Saito, program manager for the Crazy Project Car, was quoted by AutoCar at the Goodwood festival with saying the electric drivetrain on the 2000GT SEV is “an early part of the development process involved in refining the technology,” adding that the technology would first be seen in a "city car" rather than a "sports car." Additionally, Hiroyuki Ogawa, Toyota’s advanced drivetrain engineering chief, was quoted saying there is a “a desire to use a manual gearbox in our electric and hybrid sports cars” because manual gearboxes are more fun than automatic transmissions or CVT's.

Coincidentally, or not, around the same time as the Goodwood Festival, Toyota and BMW announced a broad-ranging collaboration on a wide range of technology. Among the technologies to be developed was uttered the phrase: "Sports Car". Specifically, the two companies had agreed to "explore possibilities for future cooperation" concerning: a) "the development of powertrain electrification"; b) "research into lightweight technologies"; c) "the development of fuel cells"; d) "future vehicle architectures – for a sports car, for example".

Will Toyota develop an electric sports car to compete with the high powered electric cars from Tesla Motors? It is obvious that Toyota, like all the other automakers, is experimenting with electric drive train technology. The agreement between Toyota and BMW itself is proof of this. And for that matter, Toyota doesn't need to compete with Tesla, but can instead make a deal with Tesla for powertrain technology just as they did to develop the new Toyota RAV4 EV.

The response from Naohiko Saito seems most likely, that the Crazy Project Car is simply an engineering testbed and marketing tool, and that Toyota would use the experience gained by building the 2000GT SEV to build an electric city car befitting of Toyota. On the other hand, one lesson from the rise of Tesla Motors is that it is quite possible to build an appealing and powerful electric sports car. Toyota, as a manufacturer of sports cars, surely noticed this fact. Does that mean they'll build an electric sports car right away or to wait a few years?