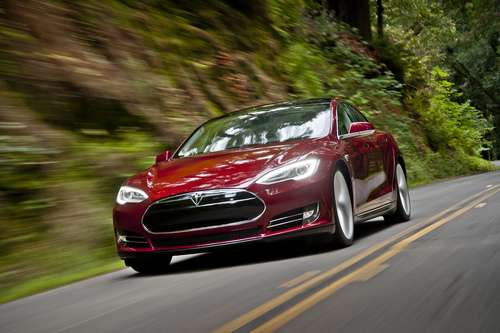 With statements by two members of Tesla Motors' that the Model S production rate has reached 20,000 cars/year, the company may be able to start funding itself and stop relying on investors.
Advertisement

The big question surrounding Tesla Motors is whether the company will survive or crash and burn. Writing an Inside Tesla post on the Tesla Motors blog, on Tuesday, George Blankenship, Vice President, Worldwide Sales and Ownership Experience made the first concrete statement that the company had reached a 20,000/year Model S production. According to Elon Musk this sales rate is double what's required for the company to reach cash-flow-break-even.

Blankenship's blog post covered a long list of updates, but their production rate is the key metric we've been looking at for several months. Production of the Model S began in June 2012, and the company increased the rate between them and the end of the year. The production rate increases fell behind the original expectations, and rather than produce 5,000 Model S's in 2012 the company produced a fewer number of cars. Tesla has not disclosed the actual production for 2012 at this time, but the key milestone is to reach the full production rate. Why? This dates back to statements made by Elon Musk several times in 2012.

For Tesla Motors to reach that production milestone, to be cash flow positive, would eliminate most of the questions over Tesla's survival as a company. The company has always funded itself by raising money from investors, as well as the loans from the Department of Energy. There's only so long a company can continue doing this, because each round of fundraising digs the debt hole deeper.

What Blankenship wrote is: "We went from zero production in May to a production flow in December capable of delivering 20,000 cars this year." That production rate calculates out to the 400 cars/week goal the company had set for itself by the end of 2012. This correlates to a statement by Jerome Guillen, the company's director of Model S programs at the 2013 North American International Auto Show (NAIAS), who said at that time the production plant (in Fremont CA) is running at a "full annualized run rate of 20,000 vehicles per year".

Blankenship did have a few other things to say.

The company conducted a survey of 500 Model S owners to get feedback on the car and the company's processes. Blankenship didn't report on a specific step taken because of the survey, but it's a sign that the company is taking steps to proactively improve their offerings.

The company is changing the process to get roadside assistance, request service, and get answers about an owners Model S. Every Model S owner will receive a card in the mail giving the phone number.

Some items like rear facing seats or the high powered wall connector are now being manufactured and are being delivered to customers.

The on-board Model S software has been updated and owners are urged to upgrade to version 4.2 through the touch-screen display "because it not only fixes a few minor bugs, it also activates many new features and provides access to something a lot of people have been looking forward to…the Android and iPhone apps." Those smart phone apps are now in the respective app stores, and allow Model S owners to monitor charging, to precondition the car on a hot or cold day, and more.

They are looking to open new stores and service centers during 2013. Blankenship named stores in Austin, Texas and Century City, California. They are also traveling to the Geneva Auto Show, and are still planning to open a store in China in the Spring.

John Goreham wrote on February 8, 2013 - 9:31am Permalink
Excellent summary of the situation David. Monday Tesla will issue its quarterly report. It will not really clear up everything because it is now about 7 weeks since the end of the report period. Hopefully Tesla will say in a statement "This is how many cars we have delivered to customers." and "This is our current delivered to customers rate per week starting Jan 1st" Let's see. The thing I worry about when I read Blankenship's quote is this; He didn't say that Tesla IS producing, and delivering to customers 400 cars per week. He put in "a production flow CAPABLE OF delivering..." What does "capable of" mean if the company has about a zillion pre-orders. Either the company is or it isn't delivering 400 cars per week. If this was Steve Jobs or Jack Welch we could just trust the estimate. But, Tesla has consistently not met the production targets it set for itself. Thus, the topic has become news. Hopefully the statement Monday will erase all doubts, silence all critics, and show that indeed Tesla is delivering 400 units per week and cashing bank checks at that rate. It would be simple to silence the critics. Tesla could just create the same sales chart every single manufacturer of automobiles updates every month. Fingers crossed the report answers the questions and that the news is all good. - ps Just came from the New England International Auto show. I still have never seen a Model S in person on the road, at a car show, or at the twice annual International Motor Press Association meetings (at which Fisker, and other EVs are very common). I know there was one at the Detroit show. Planning to visit the Natic Store soon to see if there is one on display.
Anonymous wrote on February 9, 2013 - 5:34am Permalink
He can't say that Tesla is producing 20,000 cars a year because this is the first month of 12 at 400 cars a week and that's why he said capable of. Seems like just semantics to me and nothing to be concerned about.
John Goreham wrote on February 16, 2013 - 12:07pm Permalink
Second month, but who'se counting.

LG's New EV Battery Plant Is a Welcome News for Tesla
Tesla Giga Berlin's New Hurdle: It's Not Only the Gov't, but Now Tesla Itself
END_OF_DOCUMENT_TOKEN_TO_BE_REPLACED