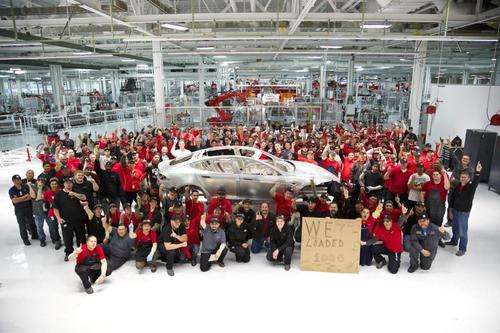 Because of other manufacturing delays, the 40- and 60- kilowatt-hour versions of the Tesla Model S will be delayed by 2 months, but in the grand scheme the company still intends to reach a 20,000 car/year manufacturing rate for 2013.
Advertisement

Tesla's original manufacturing plans was to produce 5,000 Model S's in 2012, and 20,000 in 2013. However certain delays happened and Tesla's manufacturing rate did not ramp up as quickly as originally forecasted. Tesla's management has said that they're working hard on reliability of their supply chain, and that the Model S production rate will increase to 400 vehicles/week by the end of the year. A 400/week production level means approximately 20,000 cars per year.

Another aspect of the delay is that Tesla has not received EPA certification of the 60 kilowatt-hour Model S. Tesla's letter says this will be announced soon.

While the delay is disappointing to the Model S reservation holders, in the bigger scheme of things it is more like a road bump or growing pain. Tesla still maintains they will manufacture 20,000 Model S's in 2013 and by the end of the year Tesla should have sold/delivered more Model S's than the entire run of Tesla Roadsters.

Nicolas Zart wrote on December 7, 2012 - 4:29pm Permalink
I heard through the grapevine that Tesla expected people to flock to the base model and calculated their stocks accordingly. They got swamped on the higher-end version and need more base series inverters... to be confirmed.
Shadee wrote on May 24, 2014 - 7:49am Permalink
Electric heat is one of the most inefficient means of hentaig-as well as being expensive. Hopefully you don't have to depend on that method all the time. Thanks for the comment