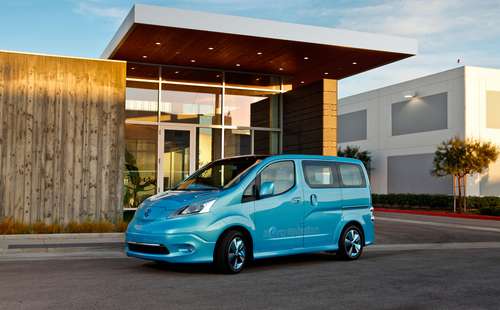 Nissan's e-NV200 going into production in Barcelona in 2013

The upcoming Nissan e-NV200 all electric commercial van is slated to go into production at Nissan's factory in Barcelona, beginning in 2013. The e-NV200 is the all electric version of the NV200 van that's targeted at the light commercial van market.

When launched the e-NV200 will be Nissan's second all electric vehicle, following the Nissan Leaf introduced in late 2010. Producing the e-NV200 in Barcelona allows the van to be built on the same assembly line which builds the NV200.

The e-NV200 provides the functional and roomy interior space with innovative and practical features of the NV200, combined with the all electric drive train powering the Nissan Leaf. The electric motor on the e-NV200 is the same power as the Leaf's, as is the battery pack capacity. This melding of the Leaf with a cargo/commercial van can be thought of as a Leaf that can haul stuff or people. The e-NV200 also recently won the Environmental Award in the 2012 Fleet World Honors program.

The NV200 line is very popular, with total sales approaching 100,000 units. That popularity was part of the reason why the NV200 and e-NV200 was chosen to be part of New York's Taxi of Tomorrow program. While the e-NV200 is going into production in 2013, it is not expected to be deployed as a NYC Taxi until 2017. In the meantime gas powered NV200's will begin being used as NYC Taxi's in 2013.

Because taxi or delivery van service could require long daily driving range, which may seem incompatible with today's electric vehicles, but in truth is not the limitation one would think. First, there are many delivery scenarios where trucks are driven over a fixed daily route, that often fit into the 100 miles or so range the e-NV200 will support. Second, because Nissan has adopted the CHADEMO fast charging standard, the e-NV200 will support quick charging allowing it to effectively cover more daily driving range. To drive home the point, Nissan's e-NV200 teaser site shows it positioned next to the new Nissan-designed inexpensive CHADEMO charging station.

Andy Palmer, Nissan Executive Vice President, said: "e-NV200 represents a genuine breakthrough in commercial vehicles and further underlines Nissan's leadership within the electric vehicle segment. The new model will offer all the spaciousness, versatility and practicality of a traditionally powered compact van, but with zero CO2 emission at the point of use and provides outstanding driving experience that is unique to EV's. Crucially, it will also offer class-leading running and maintenance costs which makes it an exceptionally attractive proposition to both businesses and families."

The e-NV200 is expected to be a large part of Nissan's goal of becoming the worlds largest Low Carbon Vehicles (LCV) by 2016. Last year Nissan sold over 1 million LCV's in a single year. Andy Palmer added: "e-NV200 represents a bold and innovative addition to our commercial vehicle range, which is already one of the broadest of any manufacturer."