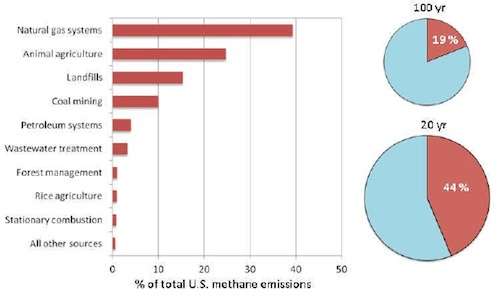 Some promote natural gas as a clean fuel for transportation that can solve both the climate change and energy security crises, but a paper released yesterday in Climate News casts doubt on that direction.
Advertisement

Some have proposed Natural Gas to be used as a supposedly clean "bridge fuel" to address both climate change and national energy security concerns. However recent research, published in Climate News, by a team led by Robert Howarth, Renee Santoro, and Anthony Ingraffea of Cornell Univ, casts a shadow of doubt on this proposal due to methane leakage, not to mention the controversy over hydraulic fracturing that has enabled the natural gas boom to exist in the first place.

Natural gas and methane are essentially the same, chemically speaking. Methane, which is a far more powerful greenhouse gas than carbon dioxide, occurs naturally in various contexts such as decomposing biological material, from landfills, and is also released during hydraulic fracturing operations. A few years ago Natural Gas supplies were seen to be extremely tight with the peak of natural gas production right around the corner and a decline in natural gas production would have set in by now, if it were not for hydraulic fracturing. The hydraulic fracturing process involves pumping water laced with various chemicals underground to fracture the rocks, and cause chemical reactions, resulting in a release of methane. That methane is meant to be captured and sold on the market as natural gas. However, many blame hydraulic fracturing with polluting groundwater, and in any case Howarth's team showed that not all is rosy perfect with this scenario.

The advantage of burning methane or natural gas is that, in addition to operating a machine or making heat, the methane is converted into carbon dioxide. While carbon dioxide is still a greenhouse gas, it is less potent than methane. Hence it can be argued that if the methane already exists, burning it makes it less harmful while producing a benefit.

Compressed natural gas (CNG) is widely used as a transportation fuel but in specific niches such as city bus systems.

With that basic understanding out of the way, let's turn to the study.

Robert W. Howarth, Cornell University, said: "We believe the preponderance of evidence indicates shale gas has a larger greenhouse gas footprint than conventional gas, considered over any time scale. The greenhouse gas footprint of shale gas also exceeds that of oil or coal when considered at decadal time scales, no matter how the gas is used. We stand by the conclusion of our 2011 research: 'The large [greenhouse gas] footprint of shale gas undercuts the logic of its use as a bridging fuel over coming decades, if the goal is to reduce global warming.'"

The team published yesterday, in Climate News, a rebuttal to criticism they received after their groundbreaking April 2011 paper. The new paper, titled "Venting and Leaking of Methane from Shale Gas Development: Response to Cathles et al." is the "first comprehensive analysis of greenhouse gas emissions from shale gas obtained by hydraulic fracturing, with a focus on methane emissions."

The core of the Howarth team's argument is methane leakage during mining of natural gas from hydraulically fractured shale formations, as well as leakage in the distribution and transportation infrastructure. Remember that methane when burned converts from a potent greenhouse gas, to the less potent carbon dioxide. But methane leaking out of pipes is still methane, and is a highly potent greenhouse gas. What Howarth's team has done is create a comprehensive estimate of the methane leakages.

Following a hydraulic fracturing process methane leaks out of the well before the well can be capped. Howarth's team notes an EPA report documenting that methane emissions from the well during hydraulic fracturing cleanup are simply vented to the atmosphere, in other words adding to the greenhouse gas footprint.

Natural gas pipelines are sometimes leaky, due to the age of the pipeline infrastructure. The average long distance gas transmission pipeline is over 50 years old, and in some cities the natural gas infrastructure is 80-100 years old. Overwhelmingly the pipelines are made of steel, and steel rusts. An example of this problem is the pipeline explosion in San Bruno CA (just south of San Francisco) a couple years ago which has been attributed to aging natural gas pipelines that were incorrectly manufactured in the first place.

The paper concludes these two problems can be fixed. First the EPA has proposed regulations to capture methane leaking from shale gas wells. Secondly, the methane leaking from the aging infrastructure can be addressed by rebuilding the U.S. natural gas pipeline infrastructure. However, this will be extremely expensive to accomplish and the paper asks this highly relevant question: "Should society invest massive capital in such improvements for a bridge fuel that is to be used for only 20 to 30 years, or would the capital be better spent on constructing a smart electric grid and other technologies that move towards a truly green energy future?"

Tsingshan's Threat to Tesla: EV Maker Is In Battery Crosshairs
Tesla-Funded Research Reveals One of The Biggest Mysteries of EV Battery
END_OF_DOCUMENT_TOKEN_TO_BE_REPLACED