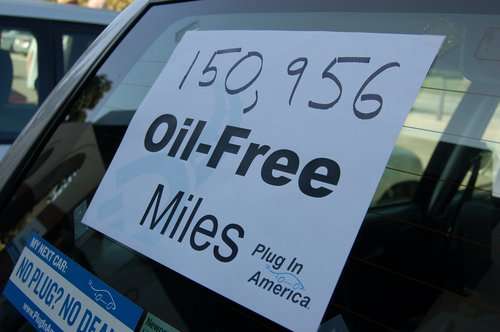 For the second year, National Plug-in Day will bring together owners and prospective owners of all electric, battery electric or plug-in hybrid cars to show off the many benefits these cars have over gasoline powered cars.
Advertisement

For the second year running National Plug-in Day will be an opportunity to experience and learn about cars that can be plugged-in to recharge a battery pack that stores power to drive the wheels. All electric, battery electric or plug-in hybrid cars are becoming more available with every new car model introduced by a manufacturer, and with every car bought by a consumer. National Plug-in Day will gather individuals who own plug-in cars, as well as the plug-in car manufacturers, to show off the cars to the public and to each other.

The event is being held on September 23, 2012 and is organized as a collaboration between Plug-in America, the Electric Auto Association, and the Sierra Club.

It will be a day of awareness raising over the environmental, economic and other benefits of vehicles which can plug-in and use electricity as a fuel. The event is billed as being an opportunity to see real honest to goodness electric vehicles, talk with electric vehicle owners, view the equipment used with electric vehicles, and perhaps get a chance for a test drive in one. Additionally, existing plug-in car owners will have a chance to meet with one another and talk about their experiences.

The event organizers name these advantages of plug-in cars: Plugging In makes driving far more convenient. We charge at home, which means our "tanks" are always full when we leave the house. We seldom, and many of us never, have to make a trip to a gas station. Cheaper to fuel. Imagine paying the equivalent of about $.75 per gallon of gas and almost nothing for maintenance or repairs. More fun to drive. They go everywhere and accelerate like a rocket. Cleaner. Less gas means less pollution, even when taking into account pollution from electricity used to charge nearly all EVs in nearly all locations. Freedom from oil. Each year in the US we burn roughly 121 billion gallons of oil in our passenger cars and trucks. That means we're spending about $1 billion a day on imported oil. Enough!

The 2011 National Plug-in Day had around 30 events around the country. The larger number of Plug-in Day events in 2012 simply reflects the number of new electric and plug-in hybrid cars in the hands of consumers.

Over 50 local events are expected to be held across the country with information available at PluginDay.org.

The Electric Auto Association is a nation-wide organization, with local chapters across the country, and nearly 50 years of history in promoting electric vehicles. EAA chapters routinely hold public events to show off electric cars and build awareness. In some cases the National Plug-in Day event is replacing the local EAA public events. For example this year is the 40th anniversary of the Silicon Valley EAA EV Rally that has historically been held in Palo Alto, but this year that EV Rally has morphed into the local Plug-in Day event. Rather than being located in Palo Alto, this year it will be held at nearby De Anza College.