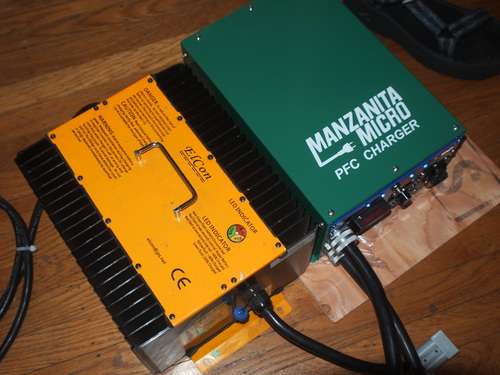 How powerful of a charger is required to kill electric car range anxiety?

Long distance trips with electric cars are possible, even for short driving range electric cars, by carefully planning a route with available charging stations, and by choosing a car with a powerful charging system.
Advertisement

How do electric car owners handle trips just outside the driving range of their car? Do they throw up their hands, frustrated that their zero emissions car is incapable of fulfilling that American past-time, the road trip? Do they rent a gasoline car? Or do they find charging stations along the way of the trip? Last weekend I had just that question, as I was to take a trip to a destination over 100 miles from home, to the Laguna Seca raceway for the e-Power/TTX electric motorcycle race. My only vehicle is an electric car, a home built conversion with a 50-60 mile driving range. Even though the car's driving range is much less than the distance required, I completed the journey, and learned a few things along the way. Last week at Plug-in 2012 a Coda Automotive representative called on electric car makers to build cars with longer driving range, to install "range confidence". My trip last weekend demonstrated that a higher powered charger goes further in creating range confidence, than does a bigger battery pack.

While my car has a driving range shorter than any of the currently available manufactured electric cars, its 50-60 mile range has been sufficient for most of my needs. Most trips require charging the car at home, and not straying too far from home. This is called "home base charging", where the electric car is only charged at home. Slightly longer trips, beyond 1/2 the driving range from home, can be easily accomplished if the destination is near a charging station. One simply parks the car at the charging station, goes about their business at the destination, waiting a sufficient time so the car is charged enough to drive home. This is called "destination charging," where the car is charged at home and at the destination. My trip last weekend required charging along the way while traveling, and charging the car becomes part of the trip.

The charging rate of an electric car on-board charger controls the speed of the trip. Chargers are rated by the kilowatt rate at which the battery pack is charged. Todays electric cars have on-board chargers rated for either 3.3 kilowatts or 6.6 kilowatts. Except for the cars manufactured by Tesla Motors. Most charging stations support a 240 volt 30 amp charging circuit that can handle a 6.6 kilowatt charger, but some are rated for more.

Because it is a home built conversion, it's easy to replace components like the charger, and I found a vendor (Manzanita Micro) which sold a more powerful charger. One rated for 40 amps, versus the 12 amps the existing charger could handle. In theory this would mean 30-40 miles of driving range per hour of charging, depending on the capacity of the charging stations. The new charger is more expensive than the one it replaced, but by providing more miles of driving range per hour of charging, longer range trips are more feasible, and in theory I would be renting gas cars less often. In fact, a month ago I had rented a gas car to drive to the same destination, because of how much charging time the trip would take.

The first day covered about 150 miles in total, driving from Silicon Valley down to Monterey, then back to a hotel 50 miles north of Laguna Seca. Using a combination of the Recargo charging station app on my iPhone, and Google Maps, I mapped out a half dozen charging stations within the area I would be driving. I chose stations spaced at 25 mile or so intervals along the route, to give a little more flexibility in the trip. For example, after the stop at the Gilroy Outlet Mall, I chose to drive directly to Monterey bypassing the charging station in Castroville at the mid-point, because it was clear the car would have enough charge to make the distance without stopping. The Gilroy charging station is 45 miles from my home, and it required 2 hrs 45 mins to recharge the car, but the previous 3kw charger would have required nearly 5 hrs to recharge. Another leg that day covered 33 miles, requiring 1 hr 56 minutes to recharge, while the previous charger would have required nearly 4 hrs. Total distance covered, 150 miles, and 8 hours of charging.

The following day was simpler, drive from the hotel to Laguna Seca and back. One critical finding was a charging station in Salinas originally installed as a collaboration between Tesla, Solar City, and Rabobank. The companies had installed a chain of high powered (70 amp capacity) charging stations between the Los Angeles and SF Bay Areas originally with the Tesla-proprietary charging connector. More recently these were modified to support the J1772 charging connector, while still handling a 70 amp charge rate. This meant the new 40 amp charger could be turned up to maximum, and the faster charging rate meant more miles could be covered in the same time. Total distance covered, 97 miles, 5 hrs 30 minutes of charging.

The final day was similar to the second day, but ended with a drive back home, requiring 150 miles in total for the day. The total charging time to make it home was under 5 hours, but the car arrived with a nearly empty battery pack. I did not measure that charging time, because I was asleep.

The charging time required for the trip may seem excessive, especially compared to the ease a gasoline car owner would have covered the distance. With the more powerful charger, the charging time was a fraction of what it would have been with the slower charger. This made driving the electric car more practical for the trip than otherwise. The time spent waiting for the car to charge was not wasted, as I was able to work on other things (writing projects) during that time. Had the hotel owner been enlightened enough to make charging stations or electrical outlets available, the car could have been charging while I was sleeping reducing the effective charging time.

The new higher powered charger on my car means the car can be driven further per day, making longer trips feasible. With the 3 kilowatt charger I had grown to feel trapped within a fairly short driving range, because of the long recharge time involved for longer trips. This new charger made last weekends trip, a total of nearly 400 miles of driving, feasible, though with admittedly long waits at charging stations. Any electric car with a faster charging rate will be more flexible than one with a slow charging rate, for the same reason.

Nicolas Zart wrote on August 1, 2012 - 1:27pm Permalink
Kudos David, you hit it on the nail. Bigger is not always better despite insecurities :) Faster, beefier chargers can handle quicker recharge times. The thing we'll need to see is if batteries can handle quicker charging times over the span of their lifetime.
jzj wrote on August 1, 2012 - 5:21pm Permalink
This well-written explains why I believe the following must be national priorities: 1. Establish a fast-charge protocol 2. Install plentiful fast-chargers 3. Enable a reservation system for all charging stations I will note that, unsurprisingly, Tesla is ahead of the curve in undertaking exactly these three measures.
Rob wrote on August 1, 2012 - 6:53pm Permalink
If your battery had a 200 mile range you could have done each day in one leg with no charging breaks then trickle charged overnight where you were staying. Trickle charging is much friendlier for extending battery life. With a 200 mile pack the total number of discharge cycles of your battery would have been 3-4 times less and discharge cycles is one of the biggest determinants of battery life, in addition the depth of discharge would also have been less which is also important for battery life. Personally I think the sweet spot is about 200 miles, anything over that and the extra weight and expense isnt worth the payoff for the tiny percentage of trips such range would allow, 200 miles makes the odd 600 mile per day road trip a possibility with 2-3 charging breaks at high powered chargers.
James Killick wrote on August 3, 2012 - 4:02am Permalink
I have converted a 1996 Ford Porbe to all electric. I am currently running on recycled lead-acid batteries and lucky to get 20 miles. I am doing this while I save my pennies to get Lithium batteries. I can expect to pay about £7500 (~$12000) to get 25.6kWh battery pack and that should get me up to 100 miles. This will cover most of my journeys. My mum lives just over 100 miles away, so I would need to stop for a top up along the way, but only a small top up, so a 1hour coffee break should do. If I could afford it, then I would go for 200 miles. If I wanted to do more than that I would use a petrol car (hire or borrow). Fortunately I have a petrol car too as my 20 miles range is quite limiting. However I have not used my petrol car for the last 3 weeks. I have a 2.6kW charger and it takes about 4-5 hours to give me 40 miles (the best battery I have had installed so far).
John wrote on October 13, 2012 - 8:44pm Permalink
Where can I go to affordably convert a 2009 Honda Civic Hybrid to a full Electric Vehicle capable of 200 miles per charge?