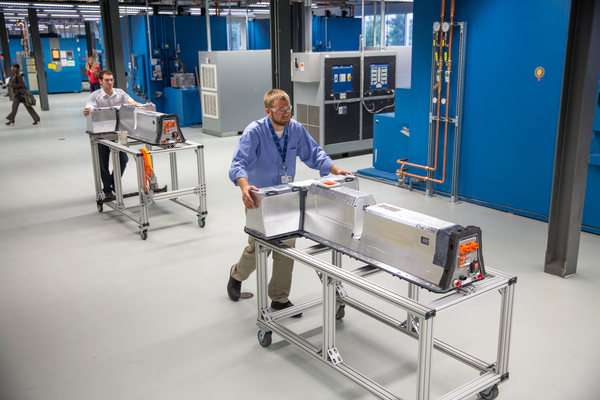 GM's plans for a long range electric car, perhaps 200 mile range, are back in the news, and this time it's said they're looking to challenge Tesla Motors' electric leadership. Tesla Motors has long said their goal is to offer a 200 mile range $35,000 MSRP (before tax credits) electric car by 2017, but now GM is throwing their hat into that same ring.

Such a car would be a game changer in the automobile industry. The long range would erase one of the electric car adoption hurdles ("range anxiety"), especially if coupled to fast charging. The combination would also represent a battery price breakthrough that would address another hurdle, the purchase price for electric cars.

The disclosure that GM is working on such a car came on Monday, as reported by the Wall Street Journal. They quote remarks on Monday by Doug Parks, GM's vice president of global product programs, during the unveiling of an expansion of GM's Global Battery Systems Laboratory in Warren MI. Parks told the WSJ that GM's goal is to develop a 200 mile range electric car, a claim that agrees with a long string of statements by GM's CEO and other leaders.

Of course it's possible to build a 200 mile range electric car today. Tesla Motors does so, and the car is selling extremely well, and beginning to take a significant market share in the luxury car market. However the problem is the price, because the Tesla Model S is well out of the price range for most people. What Tesla has proved is that it's not rocket science to build a long range electric car that can implement a Road Trip. It simply requires 60 kilowatt-hours to support a 200ish mile range, and 85 kilowatt-hours to support a 270ish mile range. Getting a sub-1-hour recharge time simply requires a 90-120 kilowatt charging system.

The difficulty is to do all that while keeping the price affordable, and a $35,000 MSRP is at the upper edge of affordability for most people.

Today keeping the MSRP at that level means a 20-24 kilowatt-hour battery pack and an 80ish mile range.

The step taken this week by GM is to expand their Global Battery Systems Laboratory in Warren MI. The company has battery research centers in Michigan, Shanghai, and in Mainz-Kastel, Germany. The Warren MI lab has been expanded to 85,000 square feet with the addition this week of 50,000 square feet of lab space. The expansion let GM hugely increase the capability to test and validate battery pack designs at both the pack and cell level. The lab also now has dedicated equipment for vehicle battery system development such as charger development and testing, cord set testing and competitive benchmarking.

In other words, GM is pressing the accelerator pedal on battery system research.

In August, GM's CEO Dan Akerson stated the Gen2 Chevy Volt would have a much longer electric range. At that time it sounded like he was anxious to again say "200 mile range" but had been told by his PR team to rein it in, and he described it as having a 50-60 mile range (OR MORE). He had previously talked about huge price reductions for the Volt, and had talked about electric cars with 200 mile range in the past.

“GM is committed to vehicle electrification and our products in this area must continue to excite customers. A critical part of this plan is to deliver safe, reliable and affordable energy storage systems,” said Larry Nitz, GM’s executive director of global electrification engineering. “The new capabilities of this lab will enhance our engineers’ ability to design, develop, process and validate class-leading products to meet the needs of our growing customer base."

“In the past four years, the competitive landscape in the electrification space has grown exponentially. This has required us to raise our game and draw a new line in the sand,” said Doug Parks, GM vice president, global product programs. “To maintain our battery leadership, this additional real estate is filled with new capability that will help us improve speed to market for our next generation of battery systems and help us improve the value equation to our customers around the world.”