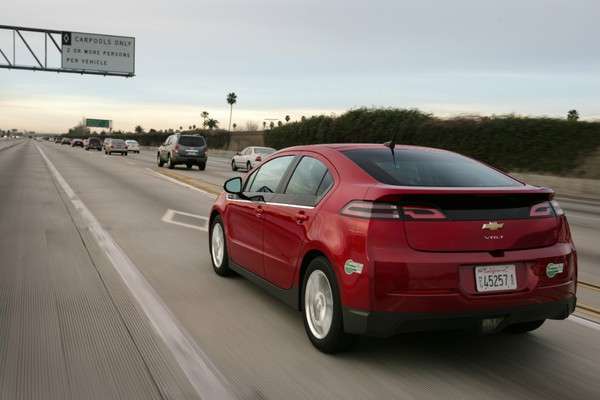 GM's CEO Dan Akerson and his loose-lips spoke again about future product plans for the Chevy Volt, predicting on Thursday a future Volt with an longer electric driving range. The statement came during an interview for Bloomberg Radio's "A Closer Look With Arthur Levitt," scheduled to air in September, an excerpt of which Bloomberg is running on their website.

The excerpt starts with Akerson being asked about GM's move to lop $5000 off the MSRP of the 2014 Chevy Volt. That move looks like a price war that began in January when Nissan unveiled the 2013 Nissan Leaf with a lower MSRP, starting at $28,800, which was about $10,000 less than the Volt's MSRP. Akerson claimed that lower battery prices, which he said was $800 per kilowatt-hour when the Volt launched, had let GM lower the price of the Volt. Akerson did not, however, say what the current battery costs are. At that price the Volt's 14 kilowatt-hour pack would cost about $12,000.

In short, while Akerson admitted GM wants to be price competitive, there were cost savings thanks to "evolution of the technology". Reading between the lines the savings could be more than just decreased battery costs, but other cost savings elsewhere.

The 2014 Chevy Volt will not see an increase in all electric driving range over the 2013 model. However Akerson did say that for the "Next Generation Volt" they would "extend that significantly." Asked what that meant he answered "for something to be significant to me, I've got to get at least a 20% improvement." Given the Volt's current electric range just shy of 40 miles, he's talking about a Volt with a 50 mile or more electric range. Specifically he said "if we can get it to 50 or 60 miles, OR MORE, we will, but that's going to be another 3-4 years out."

He concluded saying GM has a strong engineering team working hard on developing battery technology, and that there will be "further breakthroughs, not only in performance but in cost over the coming years."

How does this fit with his previous statements?

On several earlier occasions, Akerson talked about future GM electric cars with perhaps a 200 mile range. This time he didn't get as specific but implied a much longer electric range in the future. Perhaps GM's communication team has been coaching him on hedging more in his statements.

Whatever is happening with the Gen 2 Volt, when Akerson said "3-4 years out" that means the improvements will come in the 2017-2018 model years. Which is around the time period Tesla plans to bring their 3rd generation electric car to market, which is slated to have a 200+ mile electric range and cost in the neighborhood of $35,000. If Tesla can pull that off, GM will be in a world of hurt. Indeed, in a mid-July Bloomberg News interview, Akerson is described as seeing Tesla as a big threat, and GM needs to get its innovation factory in gear.