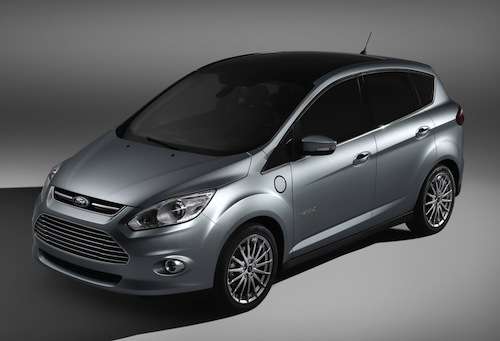 Ford is positioning the C-MAX Hybrid and C-MAX Energi as a great solution to real world problems, by enlisting the aid of an Italian cartoon character with a back-story of facing and overcoming obstacles.
Advertisement

“La Linea,” Italian for “the line,” is an Italian cartoon character who is often frustrated by obstacles s/he encounters in his world. Ford has enlisted the aid of this character in a new series of commercials highlighting how the Ford C-MAX Hybrid and C-MAX Energi solve real-world problems faced by real-world car owners.

Ford's C-MAX is popular in Europe, and is sold there either with gasoline or diesel drive trains. In the U.S. it will be Ford's equivalent to the Toyota Prius, and available with either normal hybrid or plug-in hybrid drive trains. It is similar in size to the Prius V with the same tall roofline and hatchback that makes for an easily accessed large cargo area. Additionally it is more fuel efficient than the Prius line, and has a lower MSRP. Yesterday Ford announced the C-MAX Energi has a 100+ MPGe combined city/highway fuel efficiency, with a lower MSRP than the Prius Plug-in. Back in June the company announced the C-MAX Hybrid would have a 47 MPG fuel efficiency, besting the Prius v by 3 MPG.

“The ‘La Linea’ C-MAX Hybrid ads are simple, unique spots that will introduce our first all-hybrid line in North America to Americans by hand-drawing the vehicle’s silhouette and showing how it beats Prius v, especially in fuel economy,” says Matt VanDyke, director, U.S. Marketing Communications, Ford Motor Company. “We also are targeting customers who have been sitting on the hybrid fence by showing how the new C-MAX Hybrid offers the value, performance and technology they previously thought had to be sacrificed for efficiency.”

Ford worked with Quipos, the agency in control of La Linea, to ensure the TV spots had the vintage look and authenticity of Cavandoli’s original product. The team went so far as to use hand drawn cell-animation techniques to give the spots an authentic look. The ad campaign launches nationwide today, and features TV and digital components. Integrated efforts featuring social media, print ads and events are to follow in targeted regions.

This first spot focuses on the performance of the C-MAX line versus other hybrid vehicles. The Prius line is routinely panned as slow and wimpy, and indeed while the Prius does fairly well on the highway, it is lacking a bit in the horsepower department. The C-MAX Hybrid and C-MAX Energi both have more horsepower than the Toyota Prius V.

The second spot focuses on a usability issue, which is how do you open the hatchback when burdened by a large load of cargo while on a shopping trip? With most cars you're fumbling with holding the packages while pulling out the keys and might drop everything on the ground. The Ford C-MAX has a new feature allowing you to stick your foot under the bumper, and the hatchback automatically opens.