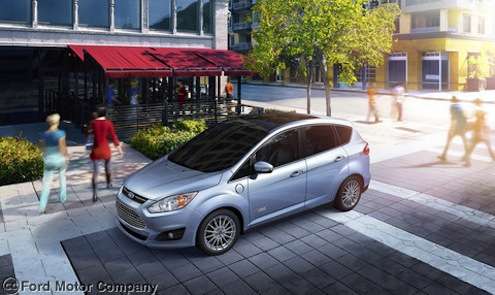 The 2013 Ford C-MAX Energi beats the Toyota Prius as the most fuel-efficient plug-in-hybrid in the U.S with an EPA certified 108 MPGe city.
Advertisement

The EPA says on their label the new C-MAX Energi will save consumers $7,000 in fuel costs over five years compared to the average new vehicle. Ford says at $5-per gallon fuel costs, (in California) if a consumer trades in a 23 mpg vehicle for a new C-MAX Energi, it would save the owner $1.25 per gallon for traveling the same distances.

The 2013 C-MAX Energi is the first production plug-in hybrid from Ford. The MAV (multi-activity vehicle) is a five passenger car that falls under a new category of production vehicles for the EPA. That group includes the Ford Focus Electric at 110 MPGe in the city and the Fusion Energi plug-in hybrid, due out in early 2013, that is projected to get 100+ MPGe. Ford is committed to producing fuel-efficient cars and their new lineup reflects that.

There are definitely advantages to owning a plug-in hybrid like the C-MAX Energi. The powersplit hybrid system allows the gas engine and brakes to work with the electric motor to maximize efficiency by recharging the battery while driving. Another big advantage over a pure electric vehicle is the plug-in capability. The C-MAX Energi can be plugged in overnight using a standard 120V outlet, or will recharge in under three hours using a 240V charging station outlet.

The new MAV from Ford uses a state-of-the-art lithium-ion battery to power the C-MAX Energi when the 2.0-liter gas engine is shut off for electric-only driving. The combined electric and gas engine horsepower is 188 and should deliver enough power to motivate the five passenger multi-activity vehicle. The plug-in-hybrid system is coupled to the latest electronically controlled eCVT transmission technology that also contributes to its fuel-efficiency.

The new 2013 C-MAX Energi comes loaded with available options and features like, SYNC with MyFord Touch, MyFord Mobile, SmartGauge with EcoGuide, and ECO Cruise to name a few. Most people will drive the new C-MAX Energi around town as a commuter vehicle and the five door hatch will also provide flexible passenger and cargo options.

At $29,995, after tax credits, the C-MAX Energi is America’s most affordable plug-in hybrid and also the most fuel-efficient. It looks like Ford is going to give the Toyota Prius plug-in-hybrid a run for its money. The all-new 2013 Ford C-MAX Energi will be available in dealerships in the U.S. this fall.