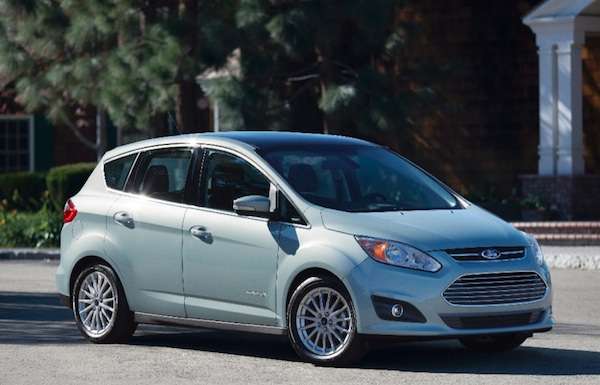 After customers raised a stink over low actual fuel economy results for the 2013 Ford C-MAX Hybrid, the company is lowering the 2013 MPG rating, and making fuel economy improvements in the 2014 model.
Advertisement

Claiming a commitment to "fuel economy leadership," Ford lowered the MPG estimate of the 2013 C-MAX Hybrid following complaints that the car did not live up to the 47 MPG that Ford claimed. The company is also making a few design changes in the 2014 C-MAX Hybrid to improve fuel economy, and offering rebate checks to customers of the 2013 model. Finally, Ford is vowing to change how it tests fuel economy in the C-MAX line.

The issue began when Ford claimed 47 MPG across the board for both the 2013 Ford Fusion Hybrid, and 2013 C-MAX Hybrid. At the time Ford touted this as a gain over the similarly sized Prius V which had a lower MPG rating. This sounded fabulous until customers, and journalists, in the field couldn't replicate the fuel economy claims. Eventually the EPA looked into the matter, and this is where things ended up.

These changes are expected to improve fuel economy, especially at highway speeds. “Ford is absolutely committed to being a leader in the hybrid market and to top fuel efficiency across our lineup,” said Raj Nair, group vice president, global product development. “We are taking actions with our popular C-MAX Hybrid so that customers are even more satisfied with the vehicle’s on-road fuel efficiency performance.”

While driver habits obviously affect fuel economy results for a given drive, Ford claims that hybrid vehicles amplify those differences. Relatively small differences in driver behavior and driving conditions can have a significant effect on the degree to which a hybrid’s gasoline engine is used for propulsion, which affects fuel efficiency.

As a good-will gesture to C-MAX Hybrid owners, Ford Motor Company is sending a reimbursement check to cover the difference in fuel expenses based on actual fuel economy versus what the customer should have enjoyed. This amounts to a $550 check for C-MAX Hybrid owners, and a $350 check to lessee's.

Tesla Contemplates A New Strategy for China Retail even As Sales Boom
Jay Leno on Elon Musk & EVs: “I Think He Should Get ... Credit"
END_OF_DOCUMENT_TOKEN_TO_BE_REPLACED