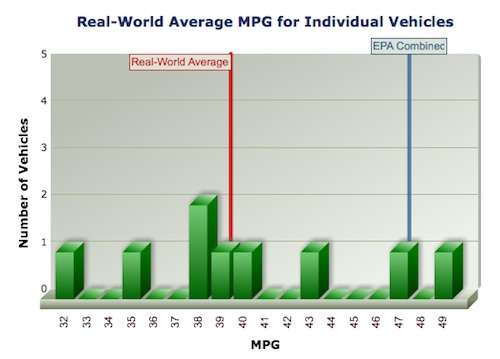 Several reports are now showing both the Ford Fusion Hybrid and Ford C-MAX Hybrid to have lower MPG's than the EPA certified fuel efficiency ratings.
Advertisement

Sometimes the EPA certified fuel efficiency (MPG) rating of a car is inaccurate. On Thursday, Consumer reports released a news item saying that their testing of the Ford Fusion Hybrid and Ford C-MAX Hybrid came up with a lower MPG rating than the EPA-certified results. Turns out that others have noted the same result, and that there is a shadow of doubt over how the EPA fuel efficiency certification is carried out.

Both the Ford C-MAX Hybrid and Fusion Hybrid are EPA certified for 47 MPG in city, highway and combined measurements. This sort of fuel efficiency is part of Ford's strategy to win market share away from Toyota and Honda, and Ford's product planners see a customer base moving toward green vehicles. Early sales results are showing Ford's electrified vehicles are coming on strong, especially against Toyota's offerings.

What Consumer Reports found is a different picture than painted by the EPA results. Their testing found the Fusion Hybrid delivered 39 MPG overall and 35 MPG city and 41 MPG highway. With the C-MAX Hybrid, they got 37 MPG overall, with 35 MPG city and 38 MPG highway. This undershoots the EPA certification by quite a margin. At this lower MPG measurement, the Fusion Hybrid is still the most efficient family sedan beating the Toyota Camry Hybrid by 1 MPG. The C-MAX Hybrid, by CR's test, is the second most efficient car in its class edged out only by the Toyota Prius V. However, when the C-MAX Hybrid received its 47 MPG EPA certification Ford loudly touted how that beat out the Prius V.

According to CR, their testing usually is within 1-2 MPG of the EPA results.

It's not just Consumer Reports, but several other news outlets according to a news item on Green Car Reports. That item summarized several other reports all showing MPG ratings in the vicinity of 40 MPG in real world driving by journalists attempting to replicate the EPA certification. To make it even more interesting, the fueleconomy.gov site shows a 39.5 MPG result for "Our users average MPG" for both the C-MAX Hybrid and Fusion Hybrid sitting right next to the 47 MPG official fuel efficiency rating. The picture shown above shows the range of MPG's reported by the EPA's users.

What's going on? Consumer Reports points the finger at how the EPA certification comes about in the first place.

First, the car maker self certifies by testing the car and reporting those results to the EPA. The EPA does do spot checks of a variety of vehicles. Second, the official EPA way to conduct the test is to put the car on a dynamo, and run it through a given pattern of speeds defined by the EPA test cycles. Those test cycles are supposed to mimic real world driving, but putting a car on a dynamo is by no means real world driving. CR's own testing involves driving a test track, and on the highway.

A Ford representative told CR: "Early C-Max Hybrid and Fusion Hybrid customers praise the vehicles and report a range of fuel economy figures, including some reports above 47 mpg. This reinforces the fact that driving styles, driving conditions, and other factors can cause mileage to vary."

This isn't the first time the EPA MPG certification came out too high. This year the EPA audited Hyundai MPG claims and ended up forcing that company to restate their fuel efficiency.

Having an accurate fuel efficiency rating is important on several fronts. Consumers use these figures to compare cars, and to predict the future fuel costs they will pay for one car versus another. The government uses these figures to determine compliance with the CAFE standard, that is due to rise to 54.5 MPG by 2025. It's a form of truth in labeling, and manufacturers routinely feel pressure to mislabel their products, to make untrue claims, and it's the job of government to keep a check on that behavior. At the end of the day we, as car buyers, must have trust in the information we're given with which to evaluate one vehicle or another.

Kip wrote on December 21, 2012 - 10:45am Permalink
I think the context of these economy ratings remains an important factor to consider. The C-Max was just released into winter driving conditions, wherein oxygenated fuel is the norm as is a higher degree of AC assisted defroster use. Throw in a slight hit for rain soaked highways as well, and I think it is fair to suggest that it's too soon to call this one yet. It looks like they lied, but more data is clearly needed.