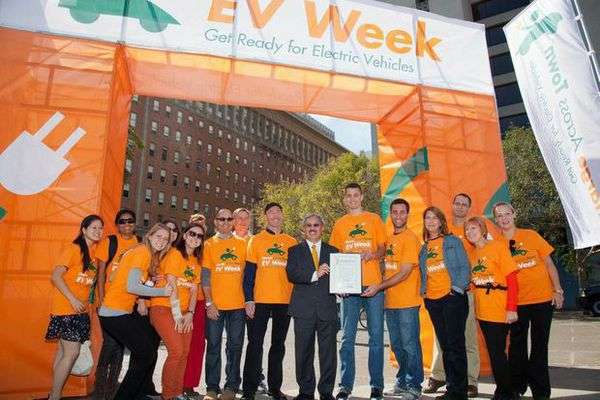 September is going to be a month of education about electric cars in the San Francisco Bay Area and beyond. The SF Bay Area education outreach will begin with EV Week 2013 organized by Charge Across Town, and is followed by National Plug-in Day 2013 organized by Plug-in America. EV Week covers three cities, San Francisco, Palo Alto, and San Jose, with events and activities meant to educate Bay Area drivers about the benefits of driving all-electric or plug-in hybrid vehicles. While the SF Bay Area is the top Nissan Leaf market, and maybe the top market for electric cars overall, there are still a lot of people here to educate about their benefits.

Every major auto manufacturer will be involved, and the list of vehicles on display will include: Honda Accord PHEV, Honda Fit EV, Ford C-MAX Energi, Ford Fusion Energi, Ford Focus Electric, Chevy Spark EV, Chevy Volt, Nissan Leaf, Toyota RAV4 EV (Gen 2), Smart Electric Drive, Fiat 500e, and the Tesla Model S. EV Week organizers hope to show that there is an EV for everyone. Other participants include

EV Week is in its second year. In its 2012 incarnation, EV Week was held solely in San Francisco, had a similar range of activities, and had over 300 people test driving plug-in electric cars. The 2013 incarnation is bigger and better, and includes Silicon Valley as well as San Francisco.

On the 25th the event moves to Palo Alto, at the Palo Alto City Hall Plaza. That location is just off University Ave, giving easy access for anyone on that busy street full of shopping and technology companies.

The EV Week activities are immediately followed by National Plug-in Day. This nation-wide event is scheduled for the weekend of Sept. 28-29, and is organized by Plug-in America, the Sierra Club, and the Electric Auto Association. The 2013 Plug-in Day will be held in over 50 cities across the U.S. and will feature local drivers and advocates of plug-in cars, as well as other events such as EV parades, test drive events, tailgate parties, press conferences and more. In the SF Bay Area, Plug-in Day events will be held at

You can learn more at their respective websites: EV Week 2013, National Plug-in Day