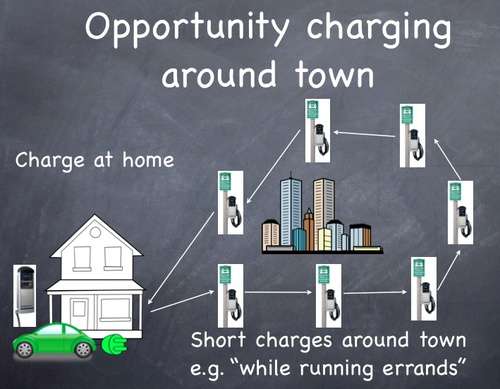 The latest round of the U.S. Federal budget showdown was averted with the deal on the payroll tax cut, but there was collateral damage with dozens of tax credits that were not extended and are now expiring on Saturday, including three related to electric vehicles and several more related to biofuel production.
Advertisement

The electric car charging infrastructure is a key to the chicken-and-egg quandary for electric vehicle adoption. The increasing number of electric cars on the road, means potential businesses and jobs will be created to install and maintain the charging infrastructure. That is, if the pattern of electric car adoption proceeds without hitch. The last few weeks has seen another of the divisive ugly budget showdowns in Washington DC. This time a package of tax credits, including EV Charging Infrastructure credits, got caught up in the battle and now those credits are expiring on Saturday, December 31, 2011, threatening the nascent EV infrastructure businesses.

Every year sees a cluster of tax credits expire, and Congress routinely attaches tax credit extension provisions to bills they're working on to extend all or some of the expiring tax credits. This year is no different in that 65 individual tax credits were due to expire in 2011, the majority expiring on Saturday. One of those was the temporary payroll tax cut that got so much heat earlier this month. While that one got a two month extension, other provisions did not, and will expire in a couple days.

The last tax credit covers purchases of two- and three- wheeled electric vehicles, as well as the Neighborhood Electric Vehicles. The electric three-wheeler market lost two companies in 2011 (Aptera and Green Vehicles) but there are several other companies still planning to sell electric three-wheelers, including ZAP and Arcimoto. The worldwide electric motorcycle market is expanding rapidly. The two biggest electric motorcycle manufacturers worldwide are American companies, Brammo and Zero Motorcycles, each with domestic and world-wide sales organizations.

In part each of these credits represents new jobs and businesses which could exist, as well as supporting electric vehicle adoption. There are businesses involved with each of these areas whose future will be affected by the existence of these tax credits.

Among the documents we obtained while researching this issue is a December 7 letter from a couple dozen Senators to the Senate leadership, concerning the tax extenders package. This letter included a story relating what happened in 2010 when the biodiesel production tax credit expired. Even though that tax credit was reinstated (retroactively) a few months later, biofuel production dropped radically and dozens of companies went out of business putting thousands of people out of work. With the tax credit in place again biodiesel production more than doubled, supported more than 31,000 jobs and generated at least $3 billion in GDP economic activity, resulting in $628 million in federal, state, and local tax revenues.

For what it's worth, there are both biodiesel and ethanol tax credits also expiring on Saturday.

A widespread EV charging infrastructure makes electric cars more useful and valuable making them more likely to be purchased. Think of all the parking lots where charging stations could be installed, and this starts to explain the scale of the businesses waiting to be birthed as electric vehicles become commonplace in the coming years. The battle is now on to get these tax credits reinstated with the deadline being the two month extension granted to the payroll tax cut.

Electric Car Fan wrote on December 29, 2011 - 5:44pm Permalink
Hi David, I thought the Electric Vehicle charging station tax credits were extended, but at a lower 30% level in the middle of December. I read about it at PluginCars. Is this not correct? In any case, do you think fewer people will buy electric cars if the tax credit is lowered?
Anonymous wrote on February 10, 2012 - 12:22pm Permalink
That was an article from December 2010 about the extension for 2011. Now this tax credit is dead.