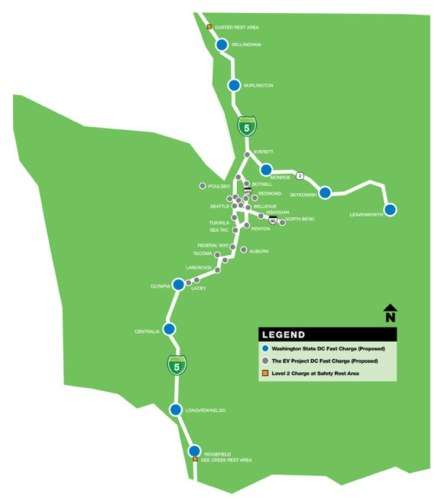 Officials from the Washington State Department of Transportation (WSDOT), with Bellingham, Wash. Mayor Dan Pike, joined local business leaders as they celebrated the ground breaking of the state’s first AeroVironment DC fast charger and its segment of the West Coast Electric Highway.
Advertisement

Yes, there are good subsidies and poorly chosen subsidies. For those who missed this event, though, the Electric Highway is part of the West Coast Green Highway, a three-state initiative to promote the use of cleaner fuels along the 1,350 miles of I-5 from British Columbia to Baja, Californian in Mexico.

“Businesses like Sehome Village and its merchants, such as Starbucks and REI, are pioneering the way to energy independence by taking that first step,” Hammond said. “And they are strengthening Washington’s role in the West Coast Electric Highway. In a few years it will be possible for people to drive their electric vehicles from Canada to Mexico.”

Bellingham Mayor Dan Pike said he was eager to join WSDOT on the Electric Highway. Under their partnership, WSDOT, together with charging station manufacturer and operator AeroVironment, developed the first public DC Fast-charging station in the state. The technology provides a 30-minute recharge for all-electric cars such as the Nissan Leaf and Mitsubishi iMiev. The charging station will include a Level 2 “medium-speed” charging pedestal to serve other electric vehicles such as the Ford Focus and Chevy Volt.

With federal Recovery Act funding through the Washington State Department of Commerce State Energy Program and local funding, the state is developing public/private ventures that support the nation’s first cross-state infrastructure for electric vehicles, paving the way for a cleaner, more sustainable way of travel.

“The city’s commitment to sustainability makes Bellingham a prime location to lead the charge to provide electric vehicle infrastructure,” Pike said. “We're proud to pave the way for a new generation of zero-emission personal transportation."

Earlier this year, WSDOT selected AeroVironment Inc. (Nasdaq: AVAV) as its business partner to provide the DC fast-charging equipment and services at retail locations such as shopping malls, fueling stations and restaurants with easy access to the state’s highways. AeroVironment is installing six stations along I-5, three stations along U.S. Highway 2 and potentially two stations along Interstate 90.

“Today, in Bellingham, electrifying I-5 goes from being a vision about a cleaner future for Washington to the start of a new reality,” said Kristen Helsel, AeroVironment vice president of EV solutions. “Together with the Washington State Department of Transportation and cities like Bellingham, we’re powering the electric-vehicle charging network in Washington, and we look forward to quickly rolling out and lighting up the remainder of the Electric Highway in the months to come.”

While I like the Nissan Leaf and the Chevy Volt, I do not appreciate helping those who can afford the new technology with my tax dollars. We didn’t do this with air bags and disc brakes; and those were considered major safety items.

However, this support by WSDOT and the federal government, in my opinion, is the proper use of subsidies. In other words, any subsidy that goes beyond research and infrastructure does not fit the definition of free market. It merely favors the rich who buy BMWs and Infinitis (per comments on my past TN articles) once again, because the masses certainly cannot afford the monthly lease rate.

I say let’s keep the subsidies at research and infrastructure. Better yet, apply the effort toward a defined national energy policy. Choosing select products and technologies is not a policy, though; it’s a political ruse.

Frank Sherosky wrote on December 30, 2011 - 3:44pm Permalink
I thought for sure someone would nail me for this one!