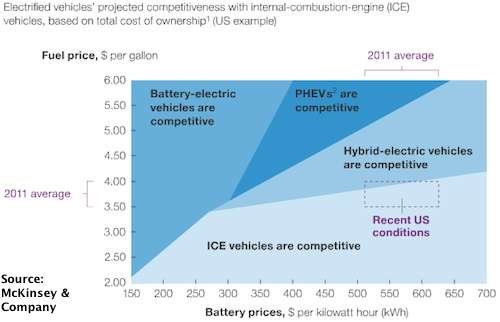 Falling battery pack prices will contribute to lower cost of ownership for electric cars, and a few years into the future electric cars could be cheaper to own than gasoline powered ones, according to a report from McKinsey Quarterly.
Advertisement

A study released recently by McKinsey & Company says that, because of falling battery prices, electric vehicles are inevitable. Shifting prices will make electric cars cost-competitive with gasoline in the 2020's. That would erase one of the two resistance factors to buying an electric car: the price. The other resistance factor, electric car driving range, will be erased along the way, according to the report.

McKinsey, a business management consulting company, published the study on its website late last week. Researchers developed a cost model for battery packs based on 40 underlying cost factors. With it they identified three factors that would accelerate the mass adoption of electrified vehicles, by decreasing the cost for battery packs, and improving the total-cost-of-ownership.

The report points to two major factors in vehicle ownership cost. For gasoline powered vehicles, the main cost driver today is the price of gasoline. That price is much higher, at approximate $3.50 per gallon nationwide, than it was a few years ago, and there are many factors indicating gasoline prices will rise significantly in the coming years. Over the short term gasoline prices will rise and fall with market manipulation, and the opening of new oil fields in the U.S., but over the long term fossil oil supply will become ever-more constrained, leading to higher gasoline prices. In electric vehicles the main cost driver is battery pack prices. For example the price difference between the 60kwh and 85kwh Tesla Model S's is a $10,000 price jump, for 25 kilowatt-hours of battery capacity. That suggests roughly one-third or so of the cost of a Nissan Leaf is the battery pack, and that the price of the 85 kwh Tesla Model S battery pack is approximately $35-40,000.

If the McKinsey estimates are accurate, battery pack prices could drop to $200 per kWh by 2020 and to about $160 per kWh by 2025. That by itself would knock $17,000 or more off the price of a Tesla Model S dropping its price from the $75-80,000 range to $60,000 or so. The Nissan Leaf, if battery pack prices fell that much, would lose $5000 or more off its price, to have an MSRP close to or less than $30,000. All these numbers are rough ballpark estimates, because as we said the actual price for battery packs is a closely guarded secret.

In February, Envia Systems announced a battery technology breakthrough for higher energy density less expensive battery packs. The company claimed that with their technology, a battery with twice the energy density could be built at 1/4th the cost of current lithium-ion batteries. Shortly after Envia's announcement, GM's CEO Dan Akerson talked about, in an interview, the potential of a 140+ mile range Chevy Volt in a few years. GM is a likely licensee of Envia's technology.

The battery pack cost reducing factors identified by the McKinsey report were:

Manufacturing at scale: This is the key to mass production economics, also known as economies of scale. High volume manufacturing usually results in lower priced products, than low volume production. The savings will come from improved manufacturing products, standardized production equipment, and amortizing the fixed costs over a larger production volume. All that business speak basically means lower battery pack prices because of better business efficiency. This should represent one-third of the potential cost savings.

Lower components prices: Higher volume manufacturing in turn allows the suppliers of battery components to improve their own efficiency. This represents 25% of potential cost savings.

Battery capacity-boosting technologies: Advances in battery technology, allowing greater energy and power density, means being able to deliver the same battery pack capacity at lower cost. Energy density is the kilowatt-hours per kilogram of weight, meaning a higher density battery pack uses less material to store the same quantity of energy. Less material required to build a battery pack should mean it will have a lower cost. Battery pack capacity could increase 80 to 110 percent by 2020–25. This represents 40-45% of the projected cost reductions by 2025.

Electric vehicles already give a cost benefit over gasoline powered vehicles, because electricity is a cheaper fuel than gasoline. But the savings on fuel costs are not enough to pay for the price premium of an electric car over a gasoline car, in most circumstances. If the electric car price premium were to fall, as the McKinsey report suggests, the fuel cost savings would make electric cars cheaper to own.