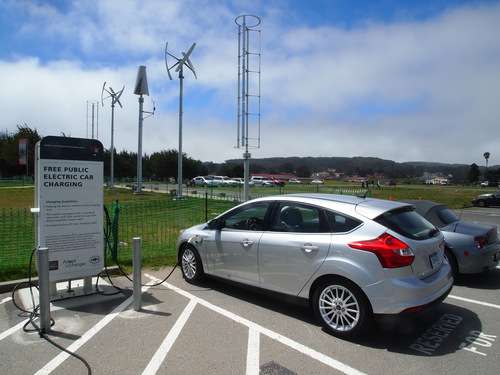 Some charging station owners are beginning to impose excessive fees up to $3.50 per hour to recharge an electric car, and Coulomb's chief executives recently suggested electric car owners eschew such charging stations, and through market demand bring the fees closer to $1 per hour.
Advertisement

Last winter we wrote about how electric cars are cheaper to operate than gasoline cars, and more recently we noted a cost calculator published by Via Motors showing that commercial fleet owners can save a bunch of money through buying electric, or plug-in hybrid, trucks versus gasoline or diesel powered trucks. How? It's because electricity is a far cheaper fuel than either gasoline or diesel. How? It comes down to calculating the benefit (miles driven) per dollar spent on electricity or gasoline or diesel. This is an "operational cost" line of reasoning, and does not consider the full total cost of ownership. In the case of leasing a plug-in hybrid from a company like Via Motors, the lease cost does a nice job of capturing the cost of ownership and, depending on the usage level, the fuel cost savings can be significant enough to pay for the lease cost.

These savings depend on one thing: Being able to recharge the vehicle using electricity purchased via the price we typically pay the utility company. The national average for electricity is around $0.11 per kilowatt-hour, but varies from locale to locale depending on local utility rates.

In a recent interview with the Christian Science Monitor, Coulomb's CEO Pat Romano acknowledged the rates being charged by some members of the ChargePoint network are excessive. He said that $2 per hour is expensive, but that the pricing will "settle in" as the market matures, as electric car owners become better educated, and charging station owners learn more about the business.

The article goes on to say both Romano and Richard Lowenthal, Coulomb's Founder and CTO, are "advocates of per-kilowatt-hour pricing" for electric car charging stations, and that only 20% of ChargePoint stations are charging fees today. The article notes that in one scenario, a business hosting a charging station, makes economic sense right now because it encourages shoppers to spend more time in the store hosting the charging station. The more time a shopper spends in the store, the more they're likely to spend, especially if they're feeling some responsibility over consuming electricity at that store.

reinCARnate wrote on August 7, 2012 - 1:41pm Permalink
I'm so glad that you wrote this article David. I have been thinking about this for some time and when I brought it up at a local EV Forum in Los Angeles, the general response from gov't and business was that we needed to allow for people to operate in a free market and that charge station operators should be allowed to charge whatever they want. Well, I guess there is merit to having unwavering free market principles, but as you state, it changes the formula for cost savings over the life of the vehicle. In turn, it makes the sale of an EV that much more difficult in an already challenging time. Overall, I think it does more a disservice than a service to allow for unrestricted charging fees. It is possible that things will normalize in a natural progression. It seems that wealthier individuals are the ones purchasing EVs, and thus can afford higher charging costs. As costs come down for EVs and the market opens up, perhaps we will see the charge fees naturally lower in response to people's tendency to avoid higher cost stations. But it is my contention that too much is at stake to allow for this to happen. We don't want to give the anti-EV lobby yet one more reason to spin this phenomenon into a reason why you shouldn't buy an electric car. I think the Mr Romano and Mr Lowenthal understand this and it's this very reason that they almost seem to be speaking out against there own clients. They understand that in order to be successful they can't have a huge barrier to entry that is essentially self-defeating. -- Also, it is very interesting to note that utilities are the only ones allowed by law to charge by units of energy. I don't think many people know that. We need to continue to press the lawmakers to update the laws to current and new realities.
Mike Murphy wrote on August 8, 2012 - 11:40am Permalink
I am in complete agreement with this stance. I own a 2012 Volt, and I will literally go out of my way to patronize businesses who have installed charging stations that operate for free. In our area the electricity is approximately half the national average, at around 6.5 cents/kWh. it costs 21 cents per hour to charge my car. Charging $2/hour is obscene: my car will drive about 13 miles on one hour of charge, and if running on gasoline gets 40 mpg. $2/hour is the equivalent of $6.20/gallon of gasoline for me. I recently drove back to Indiana to visit family. I drove PAST two malls that had $2/hour fees to charge at a mall that was free. while at that mall I dropped over $80 at three different establishments. I am installing a double level 2 charging station at my office in the next 2 weeks, and I plan to offer it for free to anyone who patronizes any of the 4 businesses in our building. I have not decided whether to only have it operate during business hours, but in any event it will not cost the user to charge up.