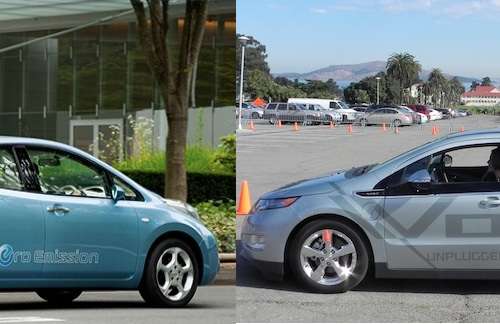 Electric car sales aren't a flash-in-the-pan success, but they are growing rapidly, and many electric car owners look to long term trends to justify their purchase.
Advertisement

The monthly car sales figures are out and the press is busy portraying electric car sales in a dismal light. While in January the Chevy Volt beat the Nissan Leaf, the sales of both are down, allowing the press to paint a bleak picture. One would think, then, that electric car owners would be depressed and ready to slit their wrists over having made such a poor decision as to buy an electric car when obviously nobody wants them.

Not so in the case of most electric car owners. An example is Steve Harvey, a Chevy Volt owner, who penned an Electric Car Manifesto for Grist Magazine.

Harvey started out noting the enthusiasm and camaraderie among plug-in vehicle owners. They tend to reach out to each other in ways that owners of other kinds of cars do not, with friendly waves, meeting each other in online forums, or even in face-to-face local user group meetings. Perhaps it's the early adopter mentality, but most electric car owners are confident in their choice and are willing to reach out to others to correct the misperceptions about electric vehicles.

Harvey's article names five items which make up his Manifesto:

First, electric driving is dirt cheap: We've covered this before, electricity as a fuel is more efficient than gasoline, and a dollar spent on electricity takes you much further than a dollar spent on gasoline. Overall electric vehicles cost less to operate than gasoline, not only because of lower fuel costs but lower maintenance costs. The lower operational costs are not yet enough to offset the higher purchase price, but as battery pack prices fall (and gasoline prices rise) the day will come, in a few years, when the economics flip around.

A recent study from PG&E concerning their growing fleet of electrified work trucks showed that diesel prices have grown at a 7.5% per rate averaged over the last 15 years, while electricity prices have remained fairly stable. The supposedly free market in fossil oil has been on a roller coaster ride the last few years. The growing difficulty in extracting fossil oil suggests the long term trend for oil prices is upwards.

Second, we think electric vehicles will eventually trump gasoline cars in the marketplace: That may sound like a bold statement given that plug-in vehicle sales are still very small compared to fossil fuel powered cars. However that's only one side of the story. Another side of the story is that the sales rate is growing rapidly, aggregate monthly sales of plug-in vehicles is three times what it was a year ago, and several new plug-in vehicle choices are going on the market in 2013. Another bright spot is the Tesla Model S whose sales in January probably outstripped both the Volt and the Leaf (400 deliveries a week means 1600 Model S's were probably delivered in January), but are somehow ignored in the articles focusing on the horse race between those two cars.

As Harvey notes, economies of scale will act to bring down electric car prices. That's not just his opinion, but was a key point in a study released on the McKinsey Quarterly website last July talking about the several factors that will bring down electric car prices over the next few years. The same factor played a role in Nissan's ability to lower the entry price of the Nissan Leaf to $28,800 (MSRP) for the 2013 American Leaf.

Third, when gas prices go up, we don’t feel sorry for you: Harvey owns a Volt, and therefore occasionally does buy gasoline, but is able to largely ignore the price at the pump. Those of us who own all electric cars never stop at gasoline stations and maybe have forgotten about the rituals in those places. Gasoline prices go up, or down, or up again, and maybe further up, based seemingly on the whims of some far off group manipulating the price of fossil oil. The price is a lot higher than it was a few years ago. Somehow those of us who own electric cars fail to feel any sympathy over others' choice to continue their gasoline dependency.

And before someone starts shouting about how it's Obama's fault that gasoline prices are so high, take a closer look at gasoline prices over a slightly longer time period. In the summer of 2008 gasoline prices were so high that Texans were reported to be parking their F-150's in favor of fuel efficient scooters. That is, until the economic collapse caused the price of gasoline to plummet, giving some political operatives a faked up story to throw at President Obama.

Fourth … OK, maybe [he] got carried away: In talking about high gasoline prices, Harvey talked about gasoline vehicle owners as if they were crack addicts. As in, the gasoline addict, like the crack addict, just wants to keep their addiction going, and will ignore facts and instead rely on fantasies that support their addiction. But there are many gasoline car owners who turn irate when compared to addicts. Those gasoline car owners would be well served by listening to Pres. Bush's 2006 State of the Union Address in which he, a Republican, said the United States is addicted to oil.

In an effort to be fair to the gasoline vehicle owners, he notes that probably most of them are largely unaware of electric and plug-in hybrid vehicles. Ignorance may or may not be bliss, but in this case ignorance gives an excuse for not understanding why a plug-in car is a good choice.

Fifth, let’s look into the future: Is the monthly horse race of whether the Volt or the Leaf (or the Model S) is ahead in sales the most important thing to look at? Or should we be looking at the long term prospects and trends?

Battery pack prices are expected to fall in a few years as newer technology increases energy density. GM has been more vocal about this long term trend than others. They have significant battery research activities in the U.S. and China, and their CEO said several times in 2012 that in a few years GM would be selling a 200 mile range electric car.

It's the battery pack price that accounts for most of the price premium for electrified cars. As battery prices falls, so too should electric car prices.

At the same time the long term price for fossil oil is going up. In general it's thought the world oil production hit its peak in 2006, but there is this "boom" in oil production happening in the U.S. due to hydraulic fracturing (frakking). This is an expensive production process, that is thought to be wreaking ecological nightmares, which may turn out to be a short-lived phenomenon. When that particular oil resource is used up the U.S. will be in an even worse spot for oil supplies.

These two trends, if they turn out the way it looks like they will, mean the electric car is inevitable. Both for ecological, environmental, and financial reasons.

hotrod wrote on February 4, 2013 - 10:02pm Permalink
So can I get a full size electric suv four wheel drive that can handle sitting for weeks at a time in northern Michigan below freezing winters and be ready to start at a moments notice with the same pulling power, speed and range as my V8 suv???
David Herron wrote on February 4, 2013 - 11:38pm Permalink
At the moment there are not electric or plug-in hybrid vehicles for every little niche of use cases. Sorry. Eventually there will be.
turbofroggy wrote on February 4, 2013 - 11:19pm Permalink
Plug in car sales tripled in 2012, I am not concerned, the electric revolution is just beginning.
Anonymous wrote on February 5, 2013 - 1:52pm Permalink
As long as there are large tax credits available for these sorts of vehicles you are going to see this sort of pattern with a spike in December sales and then a drop in January. Anyone in the buying process can claim their tax credit a year sooner if they make their purchase in December.
David Herron wrote on February 5, 2013 - 1:57pm Permalink
That may be -- Another aspect to the sales drop is a) GM idled the Volt plant in December, b) Nissan unveiled the 2013 Leaf with many improved features and a lower price. That should have tanked interest in the 2012 Leaf.
Brian Keez wrote on February 5, 2013 - 10:24pm Permalink
Reducing my monthly fuel cost by 75% just doesn't depress me. 36k miles on my Nissan LEAF and only tire rotations needed so far.
mj wrote on February 8, 2013 - 10:23am Permalink
I have looked at EV's for quite some time and took a test drive in a Nissan LEAF. I love the quiet, the acceleration and yes, the numbers DO make sense if you are looking at ONLY the cost of the electric fuel. However, 99% of what is left of the working class simply cannot afford/justify the cost of purchasing and maintaining an EV. If you have the discretionary income to splurge on the luxury of an EV, I'm very happy for you. When the economics of ownership fall in line with ICE vehicles, then the remaining wage-earning 25 year olds "may" also get on board at which time the EV market might just take off. Until then, EV ownership will remain in the emotional realm of having the newest toy or the religious realm of environment worshipers. Ownership of Chevy Volts will be limited to those who either don't realize or don't care that the purchase of a Chevy Volt is heavily subsidized (as well as propagandized). The Chevy Volt, I believe, will go the way of the Edsel. For if OBJECTIVELY compared to other EV's, it is an engineering nightmare and thus, will be a maintenance nightmare for anyone who buys one for the long-term.
Brian Keez wrote on February 14, 2013 - 12:41am Permalink
A 2012 LEAF can be leased for less than $250/month. Insurance is equal to or less than a traditional car. What expense do you imagine there is with an EV?
Mr. Smith wrote on March 6, 2013 - 9:40am Permalink
How many of the working people that you are referring to can justify the cost of ANY new vehicle? The only people I know that are buying new vehicles, EV or not, are individuals that have a fair amount of discretionary income. If are looking at new vehicles and you want to talk about the economics of EV ownership, an EV will require substantially less maintenance and will not require the four-dollar-a-gallon habit that most every American, including me, is addicted to.