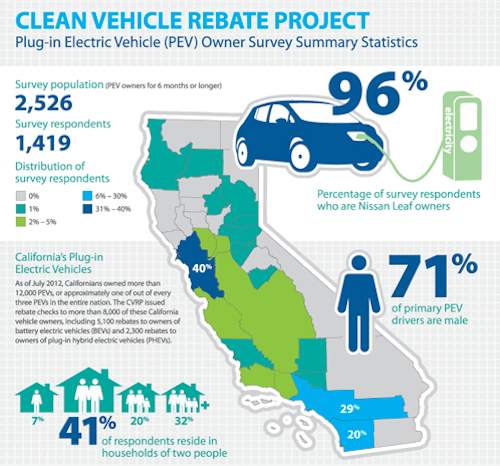 Electric car owners in California offsetting 350,000 gallons of petroleum use per month

A survey of plug-in electric car owners in California show positive economic and environmental benefits, in the largest electric vehicle market in the U.S.
Advertisement

California is leading the U.S. in electric vehicle adoption, with over 12,000 plug-in electric vehicles in the state, representing over 35% of the total in the U.S. A new study by the California Center for Sustainable Energy (CCSE) released this week shows a range of both consumer and environmental benefits.

The survey of more than 1,400 plug-in electric vehicle (PEV) owners (this includes both all electric vehicles like the Nissan Leaf, and plug-in hybrid vehicles like the Chevy Volt and Toyota Prius Plug-in). Car owners supplied information on vehicle usage, charging behavior and access to charging infrastructure. The survey did not directly calculate vehicle emissions, however the study organizers note that California's electricity mix is cleaner than in other states because California's electricity primarily comes from natural gas power plants, or hydro-electric systems.

The survey found that plug-in electric vehicle owners have a high rate of solar power adoption. Today thirty-nine percent (39%) of plug-in EV owners have solar panels, and another 31 percent (31%) are considering solar installations within a year. An electric vehicle owner who buys solar panels can recoup the investment more quickly because they are offsetting gasoline costs rather than electricity costs.

Eighty-five percent (85%) of the surveyed PEV owners use it as their primary car, that is the car driven most frequently, and drive on average 802 miles per month on electricity. The majority drive 15-30 miles/day (51%), with 15% driving less than 15 miles a day and 28% driving 30-45 miles per day. This figure, 94% driving less than 40 miles a day, is in line with transportation studies that the vast majority of people drive less than 40 miles a day. In turn many say this demonstrates that even the 73 mile range of the Nissan Leaf is sufficient for the vast majority of driving.

Favorable utility rates in some places mean PEV owners pay the equivalent of to $0.90 to $1.90 per gallon of gasoline to power their electric vehicles.

The current electric vehicles in California prevent the burning of 350,000 gallons of petroleum every month. This directly decreases the need for oil imports.

As has been observed by decades of electric vehicle owners, the current crop of PEV owners are primarily charging up at night. At night there is plenty of excess electrical capacity on the grid, meaning that if this pattern holds the electrical grid will be able to support millions of electric cars charging primarily at night-time. Overwhelmingly (96%) of the respondents own their home, 91% live in a single family home with attached garage, an 91% have installed a charging station at home.

However, seventy-one percent (71%) of PEV owners have day-time charging access at a workplace or other public location. Eighty-three percent (83%) expressed some dissatisfaction with the public charging infrastructure.

The CCSE report was done in support of California’s Clean Vehicle Rebate Project, in coordination with the California Air Resources Board.

"This is the largest plug-in electric vehicle owner survey ever taken in California,” said Mike Ferry, CCSE Transportation Program manager. “It’s still early in the development of a robust PEV marketplace, but California is firmly established as a national and worldwide leader in supporting advanced technology, zero-emission automotive transportation."