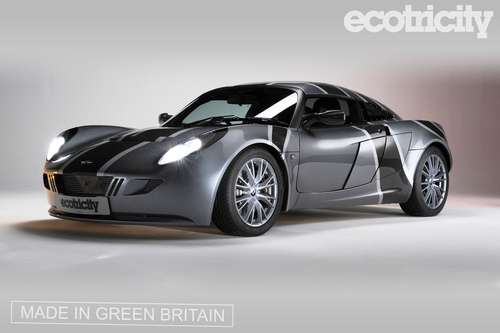 The Nemesis, an electric supercar built by UK electricity supplier Ecotricity, broke the UK electric car land speed record on Thursday. The Nemesis, based on a Lotus Exige chasis, driven by Nick Ponting at Elvington Airfield near York, has set the new UK electric car land speed record at 151 miles/hr, breaking the 137 miles/hr record from a couple years ago set with a car built by Sir Malcolm Campbell and driven by Don Wales.

The record was set at Elvington Airfield with the Motor Sport Association on hand to officially verify the record. The speed record is the average of two runs in opposite direction to account for wind differences. On the first pair of runs Nick Ponting broke the existing record, with a 148 miles/hr record, and in a second pair of runs he broke that record with a 151 miles/hr average.

The Nemesis was built on a Lotus Exige bought second hand on eBay. Ecotricity's spec sheet for the car says it has a 0-100 miles/hr time of 8.5 seconds, two 125 kW motors, giving 330bhp, and 600Nm of torque. The battery pack is 96 x 100 A/h 4.2 V pouch lithium polymer cobalt cells for 36 kilowatt hours of electrical capacity. Driving range is 100-150 miles depending on driving habits, and whether you can keep the car at a reasonable speed. It cost under £1 million pounds to build, and an 18 month build time.

Ecotricity is a UK electricity supplier that specializes in using wind energy, and goes by the tagline "turning electricity bills into windmills." The company was founded by Dale Vince, a former hippie, and has sponsored several electric racing efforts such as the Ion Horse TT ZERO team. The vision described by the company for the Nemesis is to smash stereotypes of electric cars. As they say, "a sustainable future isn’t just about where our energy comes from" it's also about food, energy and transportation. For Ecotricity, the answer to carbon based transportation is "electric cars, charged using renewable energy for the ultimate in sustainability - zero pollution, from a fuel source that will never, ever run out." To support that mission, Ecotricity built the Nemesis as a way to smash electric car stereotypes and make electric cars more desirable.

If the Nemesis reminds you of a Tesla Roadster, well, that's because both are based on cars originally built by Lotus. Both the Roadster and Nemesis share similar purposes, to smash the stereotype that electric cars can only be slow, boring and ugly. What is different with the Nemesis is that Ecotricity does not want to get into the electric car business, instead the company is already in the wind energy business.

Mr Vince said: “This is brilliant. We built the Nemesis to smash the stereotype of electric cars as something Noddy would drive – slow, boring, not cool – and I think we’ve done exactly that today. Hopefully this will further stimulate debate about the future of transport in Britain and how we’ll be getting around when the world runs out of oil. What we’ve been able to demonstrate is that wind-powered cars are not just feasible, but can be a load of fun.”