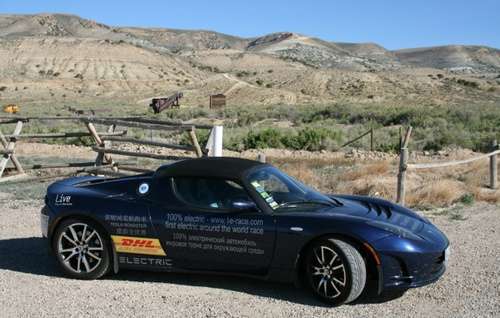 Around the world in 80 days in a Tesla Roadster, chasing the Electric Odyssey

In February 2012 two French guys, Xavier Degon and Antonin Guy, set off on an the Electric Odyssey to drive a Citroen C-Zero (a.k.a. Mitsubishi i-MiEV) around the world. Not to be outdone, Spanish entrepeneur Rafael de Mestre, who had planned to make a similar trip in 2013 with a Tesla Model S, decided instead to make the trip in 2012 with a Tesla Roadster. Even though he started 3 months later than the Frenchmen, he expects to catch up with them before they return to Strasbourg, and to complete his electric around the world trip in under 80 days.

The trip for de Mestre began in April when he began making preparations, including the necessary licenses and insurance. The paperwork is turning out to be more of a hindrance for de Mestre than the capabilities of the Tesla Roadster. He had planned to leave Barcelona, drive to Strasbourg (the starting point for the French team), leaving on May 5, 2012. However he had a 1 week delay to get the necessary passports, visa and insurance for driving in the U.S., and left Barcelona on May 11, arriving in Strasbourg on May 15, then in Frankfurt on May 18, and then in New York City on May 22. The drive across country took until June 5, with an arrival in San Francisco, and a visit to the Tesla Motors Headquarters in Palo Alto. After visiting with the Tesla HQ team he drove down to Los Angeles to prepare to leave for China, and another delay as he secured the necessary "drive through license" to drive across China. His Roadster arrived in China on June 17, but appears to be stuck at the Air Freight terminal in Tianjin at this writing.

The plan from this point is to drive across China, Kazakhstan, Russia, Ukraine, Romania, Hungary, Germany, France, Switzerland, and then return to Barcelona. However because of the delays de Mestre currently calculates that to beat the French team to Strasbourg, he'll have to maintain a pace of 400 kilometers (248 miles) per day, which may prove difficult depending on the state of electricity service in Central Asia.

Notice how the problems de Mestre is facing are not technical challenges with the Tesla Roadster, but legal challenges getting the paperwork lined up. Perhaps this is a sign of weak preparation on his part, but it also demonstrates that any time over the last 3 years ago any Tesla Roadster owner could have done this stunt.

The broader goal of this type of trip is to shatter another myth about electric cars, that they are limited to a short radius around your home.

This myth is an easy one for the Tesla Roadster to break, because its large battery pack gives it a 240 mile or so range per charge. On the other hand, Xavier Degon and Antonin Guy, the French team driving the C-Zero (i-MiEV) have a tougher challenge, because that car has a 60-70 mile driving range per charge.

Speaking of the Electric Odyssey team, their Facebook page reports having left Singapore on Sunday, and arriving in Kuala Lumpur (Malaysia) today. A month ago they were in Japan, totally enjoying the extensive network of CHADEMO fast charging stations at which they could recharge in 20 minutes rather than 14 hours. Their goal is a total trip length of 25,000 kilometers (15,500 miles) and 17 countries, at a cost of 250€ in electricity consumption, with a total trip time of 8 months.

You can check in on Rafael de Mestre's progress via 1e-race.com, and on the Electric Odyssey team via electric-odyssey.com