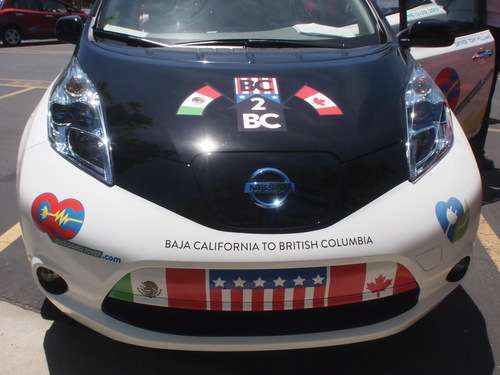 Tijuana to British Columbia in a Nissan Leaf in 8 days

A trip from BC (Baja California) to BC (British Columbia) shows an around-town electric car like the Nissan Leaf can handle a long road trip, given enough fast charging stations along the highways.
Advertisement

A San Diego man, Tony Williams, is taking the scenic route to a wedding near Seattle, driving his Nissan Leaf from BC to BC (Baja California to British Columbia) along the West Coast Electric Highway. Because the Nissan Leaf is around-town car, the trip might seem a crazy quest, with a high chance of getting stuck on a remote highway out of power. The rationalist might have just taken an airplane to Seattle, but Williams had a larger purpose in mind. The trip is about more than just attending a wedding, but to demonstrate the value and dysfunction of the electric vehicle charging infrastructure on the West Coast.

With its' EPA rated range of 73 miles, so just how can one take 1600 mile road trip with a Nissan Leaf? The answer is that it takes careful planning. It helps that Tony Williams is a pilot, and is accustomed to careful flight plans with contingencies built in. The easy part of the trip is in Oregon, Washington and British Columbia which are the segments of the West Coast Electric Highway which have been built. That segment of the WCEH has 18 fast charge stations starting at the California border and going north into British Columbia. The California segment of the WCEH has yet to be built, making that segment of the trip much harder.

There are plenty of level 2 charging stations in the metropolitan areas, but what about the long stretches of lonely highway in-between? That's where campgrounds come into play, such as the one in Big Sur where Williams spent the night a couple days ago. Because of RV drivers, campgrounds have lots of 240 volt 50 amp electrical outlets. That coupled with a modified 120 volt line charger, to support 240 volts 16 amps, lets a Leaf be charged at full speed even if there isn't an official level 2 charging station.

The "flight plan" for the trip (hey, he's a pilot) started on June 12 with a drive down to Tijuana, so he could claim having driven from border-to-border. The first full day he drove through the LA area, stopping at a CHADEMO fast charger, and ending up in Solvang. The next day involved a long stop in Morro Bay for a full charge, and a drive up Highway 1 ending at a campground in Big Sur. In the San Francisco Bay Area, Williams is meeting with a couple Electric Auto Association groups, ending the day at a hotel in Ukiah where there is a level 2 charging station. Next day is a long stretch of sparsely populated Redwood Forests in California, punctuated by stops at several campgrounds along the way. After that the trip reaches Oregon, where Williams can start using DC fast charging stations, along I5 in Oregon and Washington. Where it will have taken 5+ days to cross California, crossing Washington and Oregon will require 1 day apiece.

The West Coast Electric Highway was always to have extended down into California. Clearly Williams' trip would have been much easier if the California leg of the WCEH were in place. Williams sees this as scandalous, for example San Diego (where he lives) was to have, by now, 30 fast charging stations in place. Likewise the LA and SF Bay Areas was to have had dozens of fast charging stations.

Williams is taking this trip in part to put a spotlight on the lack of electric car charging infrastructure along the California WCEH. He is developing a business plan for a network of fast charging stations in San Diego and the SF Bay Area, and has developed a solution for the achilles heel of fast charging, demand charges. Fast chargers require a 480 volt 3 phase AC power line, and most electrical utility companies charge extra fees (demand charges) when these power lines have spikes in usage, such as the 50 kilowatts when the fast charger turns on. The demand charges can make it unecomonical to operate a fast charging station.

If all goes well, Williams will arrive in Seattle in the middle of the coming week. A ceremony is planned with Seattle area Electric Auto Association and LEAF owners groups. You can follow the journey at QuickChargePower.com.

greeneducator wrote on June 21, 2012 - 3:46pm Permalink
No problem. My wife and I have just done London to Mostar in Bosnia-Herzegovina in our Leaf without any trouble. More than 3,000 miles. Campsites are indeed the answer, our only scare came when one turned us away - never could work out why. Fortunately there was another nearby.
Frank wrote on June 24, 2012 - 1:10pm Permalink
What route did you take- an awful lot of mountains on that trip?
greeneducator wrote on June 26, 2012 - 4:34am Permalink
We went UK - Netherlands - Germany - Switzerland - France - Italy - Slovenia - Croatia - BosniaH. We did not intentionally avoid the higher mountains in Switzerland, but we wanted to go both to Zurich and Lyon, so this seemed like the right route. The mountains that we went through did affect our range, but not by as much as we feared. Going downhill is a treat, as the combination of not needing power and regenerative breaking means that you get back much of the range that you have expended on going up the mountain in the first place.
Frank wrote on June 26, 2012 - 11:11am Permalink
How long did it take and what part was the most difficult, seems like something I might do myself
kyleaf wrote on June 26, 2012 - 10:57am Permalink
Here in Lexington Kentucky, the local Nissan dealer, Glenn Nissan, turns off the power to all of the EVSE's on their lot. I think it's silly for the only public L2 EVSE stations available in Lexington to be powered down at night, when you might be desperate for a quick hit of juice to make it home. Gates Nissan in Richmond will leave their chargers on, I think all Nissan dealers should do the same, at least until a better public charging infrastructure is established.
Dan Edwards wrote on June 27, 2012 - 8:19am Permalink
I just drove the Great Ocean Road in Victoria Australia, from my home in Melbourne to Lorne return, in 2 days. I admit it is not a huge distance, a 350km round trip, but with no Quick charge facilities in our state, it's the best I could squeeze into a weekend. With more publicity around the adventures like yours, lets hope the Quick charge networks expand to cater for the growing demand. Well done and good luck on your next EVenture.