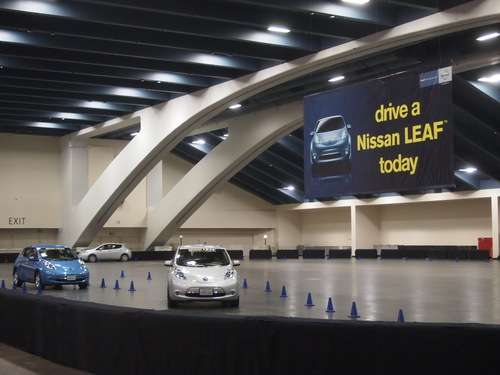 Electric cars can do to reduce the harm done by modern transportation systems, but only if a huge number of electric vehicles are sold, which leaves us with the question of how will electric vehicle sales catch on with the mainstream of car or motorcycle buyers?
Advertisement

Vehicles like the Jeep CJ5 are often displayed at auto shows in fun exhibits with fake muddy hills allowing the public to experience off-road driving. Over on the TXCHNOLOGIST blog today it's noted that, in contrast, electric cars are sometimes shown on indoor tracks with a 5 miles/hr maximum speed, which doesn't give any chance of any sort of adrenalin rush. Which begs the question of the best way to offer prospective electric car owners the experience that will sell them on owning an electric car.

Electric cars have been saddled for years with the stereotyped image of slow boring ugly golf carts. An example is the Citicar, built in the mid-70's, in the middle of the oil crises, and one of the earlier waves of electric vehicle development. That was a flimsy electric car, with a fiberglass body, either a 36- or 48- volt drive train, a top speed of under 40 miles/hr, and by modern standards a very primitive electrical system. Almost 3,000 of them were sold, and some people still have a fondness for these early electric cars, but in no stretch could one say they were exciting. Similarly the Neighborhood Electric Vehicles (NEV's) of more recent times, generally upgraded golf carts with a legal restriction of 25 miles/hr maximum speed, do little more than reinforce the "slow boring ugly golf cart" stereotype.

Most electric car experiences are limited to this class of vehicle, leaving many thinking electric cars can only be boring, and puzzling over what the excitement could be about. In that light the Nissan Leaf Drive Electric tour, visiting Auto Shows over the last few months, is an opportunity to experience driving an electric car (Nissan Leaf), that might reinforce the negative stereotype. Especially when placed next to a fake mountainside drive in a Jeep CJ5.

At the 2011 SF Auto Show a large part of the show floor was set aside as an indoor track letting show attendees drive an electric car. Perhaps Nissan had the idea that most simply don't know what it's like to drive an electric car, so the opportunity to do so is a chance for demystification. The setting did not give a chance to do anything other than creep around an oval track, unlikely to give anyone a proper experience of driving an electric car. The Nissan Leaf can be quite fun to drive, but creeping around at 5 miles/hr doesn't give any fun factor.

What's most important is simply that Nissan could do this at all. Almost nobody recognizes that a fleet of gasoline cars simply wouldn't be allowed on an indoor track. Why? Gasoline powered cars burn gasoline, meaning excess carbon-monoxide and carbon-dioxide emissions in the air in the show hall, and unless heroic measures were undertaken the auto show attendees would have been poisoned. Because the Nissan Leaf has no tailpipe and doesn't burn anything, it can be driven around an indoor track with no special arrangements to maintain air quality.

The founders of Tesla Motors knew they had to blow up the slow-boring-ugly-golf-car myth, and design every Tesla automobile with great performance options. As a result many people understand electric cars have instant torque at 0 RPM, making for thrilling head-snapping acceleration off the line. Unless a particular automaker designs their car with a sedate throttle response curve.

But what's the best way for automakers to show the capabilities of electric cars? In particular, how will the second wave of electric car purchasers be convinced to buy in. Should electric cars be entered in racing events to bring excitement into the picture?

Nissan entered a Nissan Leaf into the Pikes Peak Hill Climb last summer, and this year Mitsubishi will enter an i-MiEV. A couple weeks ago a Opel Ampera (European version of the Chevy Volt) were entered into, and won, the Alternative Energy Monte Carlo Rally. Other sorts of racing events have featured electric vehicles, such as the TTXGP, e-Power and TT Zero electric motorcycle races. There was recently set the electric car ice speed record of 156.64 miles per hour. Last summer Lightning Motorcycles set the electric motorcycle land speed record at 216 miles/hr on the Bonneville Salt Flats. And there's the TT Zero race during the TT Week on the Isle of Man, which Motoczysz won for the last two years, nearly breaking a 100 miles/hr lap speed last year.

While this is an impressive list of electric vehicle accomplishments, is this what will sell electric cars? Maybe, or maybe not. On the one hand, transportation history is full of examples of technology advances made on the race track eventually reaches the cars we buy in show-rooms. Gasoline powered vehicles are what they are today because of generations of speed crazed racers pushing vehicles to the limits on all sorts of race tracks. Will races full of electric vehicles sell electric cars? Maybe, or maybe not.

On the other hand, among the stereotypes is the granola eating tree hugger, the last sort of person one would expect to be excited about car or motorcycle races of any kind. The granola eating tree hugger is, if you can get them off their bicycle, likely to be impressed by high fuel efficiency or electric power, and be ecstatic over a low carbon footprint rather than the 0-60 miles/hr time or the likelihood of smoking Porsche's off the line.

What will sell more electric cars? The exhilaration offered by the likes of the Tesla Roadster? Or the ultra-efficiency ultra-low environmental footprint angle? It's easy to talk about how we need to switch the transportation fleet, to remove the negative environmental impact currently made by cars and trucks. Somewhere along the way the audience starts snoozing over things like parts per million of carbon in the atmosphere, or the oil production decline rate of oil fields around the world, and the push to own an electric car gets lost. What's been proven over the years to sell cars and motorcycles is the excitement we see on race tracks. The vehicles that win on Sunday tend to sell well on Monday. Maybe this pattern will remain true for electric vehicles, or maybe not.

EV me wrote on April 10, 2012 - 4:27am Permalink
What will sell these cars is when they offer financial savings, Mid size car, 120kmph, 160km range around $20k AUD thats when I will buy in. I like the concept of the Volt but way overpriced $60KAUD and the leaf $51AUD Mahindra are looking at setting up in Australia, I hope they can bring some competetion and looking at the prices we are being charged its not hard to see an oportunity.
Brian Keez wrote on April 10, 2012 - 11:21am Permalink
The Nissan drive events are great, but I agree that they should be on the road. I attended one in Santa Monica a couple of years ago and did a quick trip around the block. I learned quite a bit about the battery technology and how the car could be driven. The indoor track would have left me wondering about the cars performance. However, for those of us who are curious about an electric vehicles, the indoor track is better than nothing at all.
Paul Scott wrote on April 10, 2012 - 7:52pm Permalink
I've sold more LEAFs than anyone in the country. I do it by using my own car for test drives. A customer once asked if the LEAF could drive from Santa Monica to Disneyland and back with juice to spare. I said yes, and the guy said, show me. So, we jumped in the car and drove the 96 mile round trip getting back with about 8 miles remaining in the battery. He was sold. I always give my customers as much time behind the wheel as they want. Getting them to drive it like they drive their gas cars, but experiencing the smooth, quiet power of an 80 kW motor does it every time. They always get out of the car with that EV grin.

Tesla Giga Berlin's New Hurdle: It's Not Only the Gov't, but Now Tesla Itself
Teslas Are Sold Out Until 2023, But The Timing May Reverse
END_OF_DOCUMENT_TOKEN_TO_BE_REPLACED