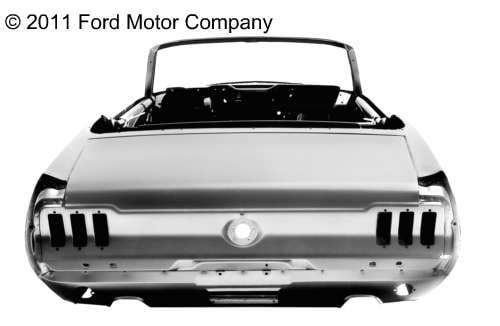 If you’ve ever dreamed of owning a 1967 Ford Mustang convertible, now you can. Some assembly is required, however. The body shell for the 1967 ‘stang convertible is now available from Dynacorn International. That makes the fourth reproduction Mustang body available to restorers, joining the 1967 and 1969 fastbacks and the 1965 convertible. Prices for the new shell start at $15,995. Back in 1967 you could have bought the standard convertible for just under $3,000. It’ll run you a lot more now, especially if it’s in good condition.

According to Dennis Mondrach, Ford Restoration Parts licensing manager, “To qualify as an official Ford-licensed restoration part, the ’67 body shell has to meet or exceed the fit, finish and quality of the original. The new ’67 convertible body shell gives restorers a super-solid foundation on which to build their dream pony car.”

In fact, the restoration bodies are better than the originals, even assuming you could find one in mint condition. Ford made just under 45,000 Mustang convertibles in model year 1967, and that was over 40 years ago. Dynacorn’s use of modern automotive-grade virgin steel, modern welding techniques, and reinforcements in known stress areas have added strength and rigidity to the shell. “These days, the chances are fairly slim of finding a restorable, rust-free ’67 Mustang that has never been wrecked,” said Mondrach. “As the value of classic Mustangs has increased over the years, garages, barns and scrapyards have been picked clean.”

With the Dynacorn body, you can start fresh. “Some minor panel adjustment and alignment still has to be done, but the body comes rustproofed and primed and is otherwise ready for painting and assembly,” said Mondrach. It can also be turned into a reproduction Shelby GT350 or GT500.

While the body looks classic, nothing says you can’t add modern equipment, giving it better brakes and more power. Not that some of the originals didn’t have power. There were six engine choices for the Mustang in 1967, ranging from the 200 cubic inch Thriftpower straight six to the 428 cubic inch Cobra Jet and Cobra Super Jet V-8, rated at 335 hp.

If you’d rather keep it classic, Ford-licensed reproduction components are available for nearly all of the parts needed to restore or build a ’67 ‘stang convertible. The body can also be used to build the Shelby GT350 or GT500. It would also make a great base for a street rod.

Check out the Ford Restoration Parts website for more information on buying parts.

Toyota's First EV Will Have a Name of BZ: Toyota BZ
First Videos From Inside The Boring Company's Las Vegas Loop
END_OF_DOCUMENT_TOKEN_TO_BE_REPLACED