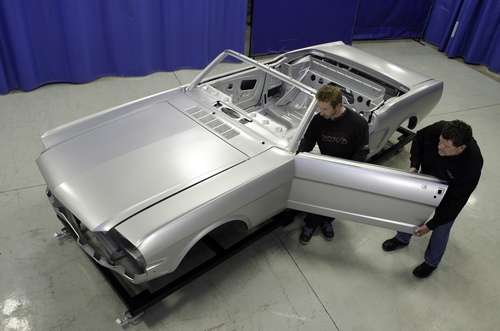 Ford is going to make the classic much loved 1965 Ford Mustang Convertible available again to the buying public. There is one little hitch... you provide the engine, transmission, interior, electronics, brakes, suspension, and trim. Ford just gives you the body.
Advertisement

The body shell for a original Mustang convertible has been available to professional restorers. This gives home enthusiasts and hobbyists the chance to bring back all the glory of a 1964 ½, 1965, and 1966 Ford Mustang, using a genuine Ford body shell.

“The 1964-66 Mustang is the most restored vintage vehicle. But the number of original 1964-66 vintage bodies is shrinking every year,” said Dennis Mondrach, Ford Restoration Parts licensing manager. “Most of the original Mustangs left in scrapyards are rusted or wrecked beyond repair. The new body shell is made of virgin metal and uses modern welding techniques. It comes rustproofed, and after final adjustment and finish preparation of the body panels, it is ready for painting and final assembly.”

Almost every part needed to build a “new” 1964-66 Mustang convertible are available from Ford-approved classic parts suppliers. Also original parts can be reused from an old Mustang and used on a new body shell.

This allows the enthusiasts and hobbyist to save time and money. It also makes it so that they can enjoy the look, feel, and excitement of those early Mustangs with the convenience of modern technology.

The ’65 Mustang body shell is constructed of higher-grade steel than the original. Also new and modern welding techniques are used to which help strengthen the body and improve safety.

“Instead of spending money fixing rust and welding in new panels, restorers can now simply transfer their powertrain, interior and trim parts onto the new body shell,” said Mondrach.

The ’65 body is in production now and can be delivered by freight truck to any address. What exactly do you get when ordering one of these shells. The body shell will include, the doors and trunk lid and all the sheet metal from the radiator support to the taillight panel except the hood and front fenders. These parts and components can be bought separately. The ’65 Mustang body shell starts at $15,000.

Back when the Mustang was introduced in the 1960's, it was an immense hit when it debut in April 1964. Lee Iacoca really hit a sweet spot with the Mustang. Ford sold more than 1.2 million Mustangs before its redesign 1966. Around 174,000 convertibles were sold during that period as well. The 1964-66 Mustang has long been the most popular American collector and classic car.

An enthusiast can take the shells and make either a 1964½, 1965 or 1966 Mustang, based on the powertrains and trim parts added to it. It is the third classic Mustang body shell now available to restorers. The other two are the 1967-68 and the 1969-70 fastback bodies.

Ford will display a new 1965 Mustang body shell Tuesday through Thursday at the Specialty Equipment Market Association (SEMA) show taking place in Las Vegas. It will be parked next to a restored 1965 convertible. All the excitement of building an original Mustang can be yours, if you have the skill and determination.