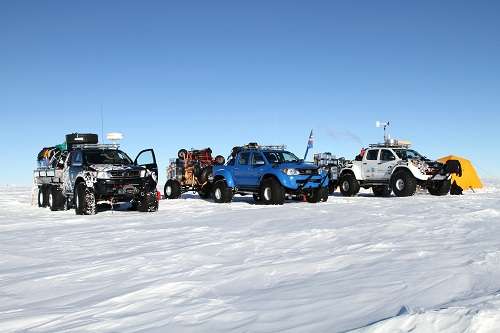 The indestructible Toyota Hilux pick-up truck has just racked up another amazing extreme endurance feat, among many, completing a journey across the Antarctic spanning almost 6,000 miles. Showing once again that the Toyota Hilux is the toughest and most reliable vehicle that has every graced the face of the earth.
Advertisement

Three Hiluxs, including two “6×6” models, completed the expedition running Jet A-1 fuel to deal with the extreme cold. Each clocked up almost 6,000 miles over four months of what I assume is quite amazing driving through Antarctic between, November 2011 to February 2012.

The Toyota Hilux's used in the double trans-continental crossing, organized by Extreme World Races, used standard 3.0-liter D-4D engines and transmissions. To meet the extremely cold temperatures in the, which can go as low as -50°C (-58*F), and harsh terrain which went as high as 3,400m. The Hiluxs were specially engineered by Arctic Trucks, Icelandic conversion specialists.

Modifications to the trucks included strengthening and reinforcing the suspension and drivetrain. Also crawler gears were added to the transmission, and the extra large tires were filled to between 2.-3 psi (compared to 29 psi for regular road-going Hilux), giving a “footprint” 17 times larger than standard tires. Another necessary modification to the trucks included fitting a crane which allowed the ability to lift heavy equipment and a 280-liter fuel tank (800 liters in the case of the six-wheel models.)

In all 10 Hiluxs trucks were deployed by the expedition team, who had lots of trust and faith in their Toyota trucks to meet the rigorous demands of setting up a fuel depot and weather station. The Hilux's also provided essential support to scientists and competitors in a ski race.

This 5,900 mile journey is farther than any vehicle of its type has managed before. Sticking to Toyota’s reputation for toughness and reliability, the Toyota Hilux completed the treacherous journey without a single mechanical issue.

This latest feat for the Toyota Hilux is the longest expedition in polar history. This adds to Hilux’s achievements of reaching both Magnetic North and South Poles.

Fans of the wildly popular BBC television show Top Gear might remember that James May and Jeremy Clarkson reached the North Pole in a Toyota Hilux in the “Polar Special.” (Richard Hammond attempted the journey with a team of sled dogs.) This was the first time that anyone had driven to the Magnetic North Pole and it was all caught on camera for the world to see.

The Hilux trucks used for the BBC Polar Special were also prepared and modified by Arctic Trucks of Iceland. They should feel proud that their Toyota Hiluxs have conquered both North and South Poles.

Top Gear additionally has proven that the Toyota Hilux cannot be destroyed by subjecting it to numerous other challenges. In one episode Jeremy Clarkson purposefully lets a used Toyota Hilux he bought get swallowed up by the ocean and then Hilux still starts. They also throw a crushing ball, drop a caravan on it, and set the Hilux pick-up truck on fire! James May then puts the truck on top of a building that gets demolished with explosives. When they recover the Toyota Hilux from the debris, it still starts and drives!

I think it is safe to say there is no vehicle that is tougher or more reliable on earth than a Toyota Hilux.

John Goreham wrote on March 30, 2012 - 11:35am Permalink
I once saw a program about trucks like these in the arctic. To deal with flats they had some sort of mentod using lighter fluid and a match. They would strip the tire of the rim, plug it, put it back on the rim most of the way, then put in the fluid. When ignited it would inflate the tire, seal against the rim and the fire would go out (no more O2). Cool, but if you get burned up in that deserted place you are in biiiiig trouble.
Adam Yamada-Hanff wrote on March 30, 2012 - 12:01pm Permalink
That's a common trick to install tires when the edge won't seal properly to the rim. It is a bit dangerous though and I definitely wouldn't want to try that out in the middle of nowhere. You need to be quite adventurous to cross the Antarctic!