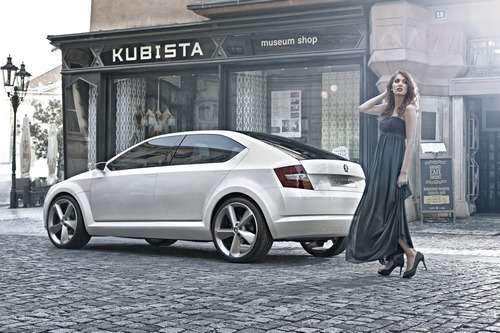 SKODA, the Czech automaker, has released new images of its stunning VisionD concept. The VisionD concept is a strong indication of where SKODA and the VW group, it's corporate owners, vehicle designs will look like in the future.
Advertisement

The SKODA VisionD concept car was unveiled at the Geneva Motor Show this year, which took place back in March. The stylish design offers a clear indication of the future design direction for all future SKODA cars and vehicles. At least this is what the company is telling the automotive press.

SKODA says the VisionD is inspired by classic form and design. It has a long wheelbase and short overhangs, which are a prerequisite for successful automotive architecture. Everyday utility and distinctive interior modular design are traditional SKODA brand values which have been freshly interpreted for a new audience (ie younger car buyers). The car has a strong, sporty, slick, and clean look which conveys a beautiful simplicity and a youthful and contemporary appearance. The cars proportions will offer better looks, while allowing for improved interior space.

VW showed the MissionL compact concept at the 2011 Frankfurt Motor Show in September, which was reminiscent of the VisionD. Some think the VisionD concept took styling cues from Audi, another VW group company. Looking at the concept, it is hard to disagree.

Even with it's slick looks, the likelihood the production version will look like the VisionD concept is unlikely. The Czech based automaker is expected to unveil a production ready version at the 2012 Geneva Motor Show. This model will most likely be easier to produce on a mass scale. It will serve as the basis of the SKODA Octavia, one of SKODA's most popular and important models. It should go on sale in early 2013.

Unfortunately there are no plans, at least that TorqueNews is aware of, to bring SKODA vehicles to the US market. The Czech automaker is doing well in European countries, like the UK.

The release of these new images does not reflect any new information about the VisionD. However, I did enjoy seeing the VisionD concept along with the beautiful Czech (I assume) model in the pictures.